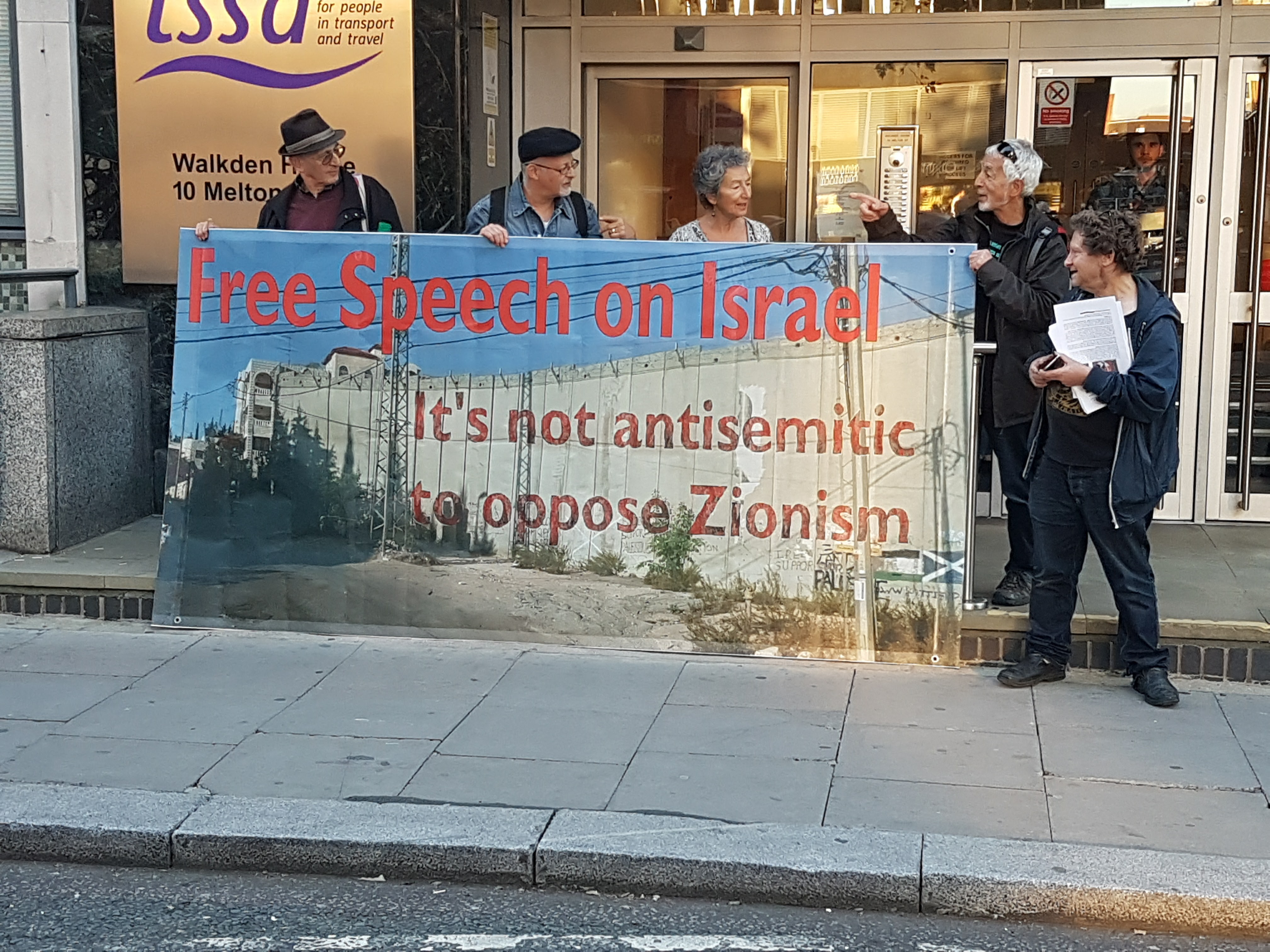 Hope not Hate is an organisation well respected for its exemplary work in combating the far-right in Britain and mobilising to confront the fascists when they skulk into public.

However for historic reasons Hope not Hate has close links with the British Jewish establishment which has led them to echo the false accusations of antisemitism that FSOI was set up to combat.

Hope not Hate has published a vicious attack on Jackie Walker written by Joe Mulhall, a highly misleading analysis that has since been reprinted by Left Foot Forward. It is a great pity that, in this instance, they have let their sympathy for a Zionist narrative overwhelm  their commitment to fighting anti-Black racism

Fatbellyman, Gary Hollands, has published a detailed rebuttal of Mulhall’s piece on his blog which we reproduce here.

Controversy exploded after the release of film footage of a ‘training event’ organised by the Jewish Labour Movement (JLM) at the Labour Party Conference. It was claimed the footage allegedly showed a leading member of Momentum, Jackie Walker, making anti-Semitic comments.

A torrent of condemnation followed from all quarters, including from fellow Momentum member Barbara Ntumy. On the Daily Politics, Friday 30th September, she stated that Jackie Walker’s comments were:

All the critics announced Jackie Walker guilty as charged, blithely ignoring one rule of evidence – which is not to take evidence selected by an organisation with a material interest at face value.

One article typical of the range of accusations against Jackie Walker was one titled Jackie Walker, The Left and Antisemitism written by Joe Mulhall and published by Hope Not Hate. This article based its condemnation of Jackie Walker using the film footage as well as revisiting old allegations.

As this was the apparent judgement of what is one of the more prominent and respected anti-racism organisations I thought a detailed rebuttal appropriate. The reply was posted on the afternoon of Friday 30th September and to date has yet to be published. Below is a reproduction of that post, it’s in its original format, including typos, to maintain a faithful copy as possible.

In defence of Jackie Walker

When an author writes serious allegations they have duty to hold themselves to a high bar, to be scrupulously fair in their arguments, to avoid distorting or putting words into the mouth of the one(s) they accuse.

Sadly, this article fails badly by that criteria.

It is mixture of straw man arguments, distortion and innuendo designed to discredit someone who has actively engaged in anti-racism all her political life.
Jackie’s mixed Jewish African-Caribbean and Jewish heritage contribute to what is a fairly unique perspective. While sometimes this can be challenging to those who hold certain viewpoints and political positions it does not necessarily follow that that is anti-Semitic.

You refer to a film footage of comments Jackie Walker made at a Jewish Labour Movement ‘training event’.

You quote Jackie, “Wouldn’t it be wonderful if Holocaust Day was open to all peoples who’ve experienced Holocaust?”.
From the filming it’s difficult to discern the whole part of that conversation due to interventions from other audience members and the point was not developed.
It should be noted that it’s not good practise to use fragments such as these in the manner you have.

For a more reliable view of Jackie Walker’s comments one needs refer to what she has said elsewhere on the subject. She has in particular raised the African slave trade as a holocaust, in fact Jackie clarified on Channel Four news 29 September 2016:

“But as a mixed-race person who is African and Jewish, I was making the point that why is the Cambodian genocide, which was after the 1940s, included and the African holocaust is not?” Walker said the criticism should be seen through the prism of the “political differences underlying it”.

Now there may be perfectly good reasons for Holocaust Memorial Day not to include the African holocaust but to to construe Jackie’s remark as anti-Semitic is specious.

Security in buildings used by Jews

Jackie raised a question on security in buildings used by the Jewish Community, raising the example of her grandson.
Unfortunately you don’t directly quote her or inform us that the context was a response to something said by the speaker.

This is what Jackie Walker actually said:

“I’m a bit concerned about other (indistinct) that your, your kind of suggestion that the Jewish community is under such threat that it has to use security in all its buildings I have a grandson he’s (indistinct) year old there’s security in his nursery school and every school has security now and it’s not because I’m frightened or his parents are frightened that he’s going to be attacked”.

You seem make the claim that this, “also appeared to denigrate the need for security at Jewish schools”, in order to follow up with, “at a time of heightened terror risks and international attacks against Jewish targets…”. That would seem to be more than a little cynical.

You also raise in the same paragraph above, Jackie stating, “I still haven’t heard a definition of anti-Semitism that I can work with.”

You seem unaware that there is a live and lively debate over the precise parameters of anti-Semitism as can be seen in a letter [http://www.jlm.org.uk/yjlm] letter to the Guardian from young members of the Jewish Labour Movement disputing positions on Zionism & anti-Semitism held by other Jews.

Jackie is right to point out the Macpherson Principles state that the police should investigate cases reported by the victim or another person as a racist crime but not to accept them as a racist crime.

She was also right to raise concerns that some groups hold the view that incidents alleged to be as anti-Semitic then denying anti-Semitism as a motive is itself anti-Semitic.
This isn’t raised in the article so perhaps Jackie’s view on this is accepted or is considered uncontroversial.

Jackie Walker may be open to the charge of clumsiness or lack of clarity in some of her contributions but I can not see how, singly or collectively, Jackie Walker’s remarks at this meeting constitute anti-Semitism.

The article goes on with further accusations. Particularly pernicious is the accusation of Jackie supporting the position of Louis Farrakhan in blaming Jews as a race for the slave trade.

You achieve this by misquoting and selective editing:

““What debt do we owe the Jews?” and stating that Jews “were the chief financiers of the sugar and slave trade””
You omit to mention that Jackie was subject to a hearing by the Labour party over those Facebook posts and re-admitted [http://www.independent.co.uk/news/uk/politics/anti-semitism-row-momentum-organiser-jackie-walker-readmitted-to-labour-party-following-racism-a7053966.html].

What was actually written was [https://m.facebook.com/cheltenhammomentum/posts/1040048392756008] :
“Many Jews (my ancestors too) were the chief financiers of the sugar and slave trade which is of course why there were so many early synagogues in the Caribbean.”
The original post is not available but there are screen grabs: [http://www.kentonline.co.uk/thanet/news/leading-labour-activist-suspended-over-95356/]

“Many Jews (my ancestors too)” is the term used by Jackie, seen in the context of her background it’s difficult to see this as an anti-Semitic attack. This distortion is also used elsewhere to attack Jacqui [https://www.buzzfeed.com/sirajdatoo/momentum-branch-plans-to-host-an-anti-semitism-debate-during?utm_term=.cjlqOrm4L#.fsJ4O5x3R]

In conclusion, the allegations of anti-Semitism by Jackie Walker is only sustainable on the basis deliberate misrepresentation and stripping her words of context.

When I read pieces such as this I’m reminded of a saying attributed to Cardinal Richelieu:
“If one would give me six lines written by the hand of the most honest man, I would find something in them to have him hanged.”

What is clear from this article and numerous others is that the attack on Jackie Walker is politically motivated.
Jackie has a history of service to the movement in general and is a well known figure on the left. Her expulsion or suspension would be a great prize for her political opponents.

It would be disappointing if the Labour Party and Momentum did not give Jackie Walker the support and protection she needs and deserves from what is nothing more than a vicious and vindictive smear campaign.

Fellow activists who attended the JLM ‘training event’ with Jacqui have condemned the allegations of anti-Semitism against her. They also raise the behaviour of JLM supporter at the event. It may be of further interest to them that a close examination of the footage audio reveals that during Jackie’s comments on buildings security someone makes reference to her grandson “in a body bag“

Those activists also raise concerns over the suitability of JLM to run training events. If the footage is from the camera used by JLM to film the event then there may well be a case for them to answer regarding unethical behaviour.

Since the reply to Hope Not Hate Jackie has been suspended from the Labour Party.

According to media reports Momentum is set to remove Jackie Walker from her post on Monday.

I have no relationship with Momentum but I did attend a public meeting organised by them with Jackie Walker as one of the speakers. I was impressed by her depth of knowledge and her eagerness to share and discuss her experience. Jackie is valuable asset to the Labour movement and it would be a tragedy to allow her political enemies to bring about her removal with such dishonest and underhand tactics.

I always consider it a proud duty to defend a fellow comrade, especially one who has given so much to our movement.

3 thoughts on “In defence of Jackie Walker”