David Rosenberg writes the second of our responses to the JDA, the Jerusalem Declaration on Antisemitism. David points to the importance of the JDA in dislodging the IHRA definition from its status of being THE definition and opening the space for debate and challenge. David Rosenberg is a member of the Jewish Socialists Group

This article first appeared in the Morning Star and is reproduced by permission of the author. 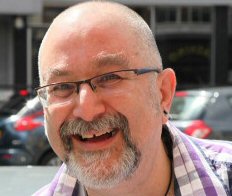 I once heard Tony Benn giving a speech at Conway Hall in which he revealed the “most dangerous word in the English language”. Only three letters long, but it had the power to elevate one perspective, and dismiss, reject, and encourage vilification of all others on the subject being discussed. The word was “THE”. Nowhere, in recent years, has Benn’s claim been so powerfully illustrated than In the controversies surrounding definitions of antisemitism.

A poorly-worded “working definition” of antisemitism, plus examples of what 21st century antisemitism might look like, were first developed for the European Union Monitoring Centre on Racism and Xenophobia (EUMC) in 2005, by the American Jewish Committee’s researcher, Kenneth Stern. According to Tony Lerman, former Director of the Institute for Jewish Policy Research, Stern’s document was signed off by just five people, one of whom was Mike Whine, long associated with the Board of Deputies and the Community Security Trust.

A few years later, as the document was widely criticised, the EUMC dropped it. But in 2016, it had a miraculous resurrection, adopted virtually word for word by the International Holocaust Remembrance Alliance (IHRA). Some IHRA national delegates, however, described it being “railroaded” through. Lerman identified two organisations – the American Jewish Committee and the Simon Wiesenthal Centre as doing that railroading. Both of these see their role as defending Israel from criticism, and the Jewish people in general from a “new” antisemitism allegedly emanating more from the left than the right.

In the plenary that adopted it, the 38-word “working definition” was separated from the more contentious set of examples (several of which related to Israel/Palestine). At that point, the examples were seen merely as possible illustrations to guide the IHRA’s work.

The timing proved very opportune for the British political Right as Corbyn’s insurgent Labour leadership posed a serious threat to an increasingly unpopular Tory government. The Tories looked for more effective weapons than traditional “red scares”, and sensed that Corbyn’s longstanding support for Palestinian rights was his Achilles heel. The pro-Tory press were eager for headlines that could link support for Palestinians to antisemitism.

The Tories found willing partners within Jewish establishment organisations, who were seeking to align the Jewish community more closely with right-of-centre politics (despite the economic needs of poorer Jews), and who routinely defended Israel’s Government, despite its racism and human rights abuses. They both seized the IHRA definition with alacrity. The rest is history.

A vague “working definition”; became “THE Internationally Accepted Definition of Antisemitism”. Illustrative examples which “might” be considered antisemitic given a certain “context”, morphed into Tablets of Stone. In 2018, Labour came under almost irresistible pressure to adopt the IHRA document, from the mainstream media, and from a range of forces hostile to Corbyn’s Labour, and  free speech on Israel, Palestine and Zionism, including from Labour’s right-wing.

Kenneth Stern has since condemned the way in which organisations have abused the definition by using it as a tool to threaten free speech.

Last Thursday, however, the tables began to turn. The Jerusalem Declaration on Antisemitism, signed by more than 200 scholars in the fields of Holocaust history, Jewish studies, and Middle East studies, including a significant number of Israeli scholars, was made public. It is everything that the IHRA definition is not. It stems from sustained and serious work by academics across continents, who know the deep flaws within the IHRA definition, and have seen it used for political purposes to delegitimise certain views as antisemitic, which they are not, and label their purveyors as antisemites.

Universalist vision of the JDA 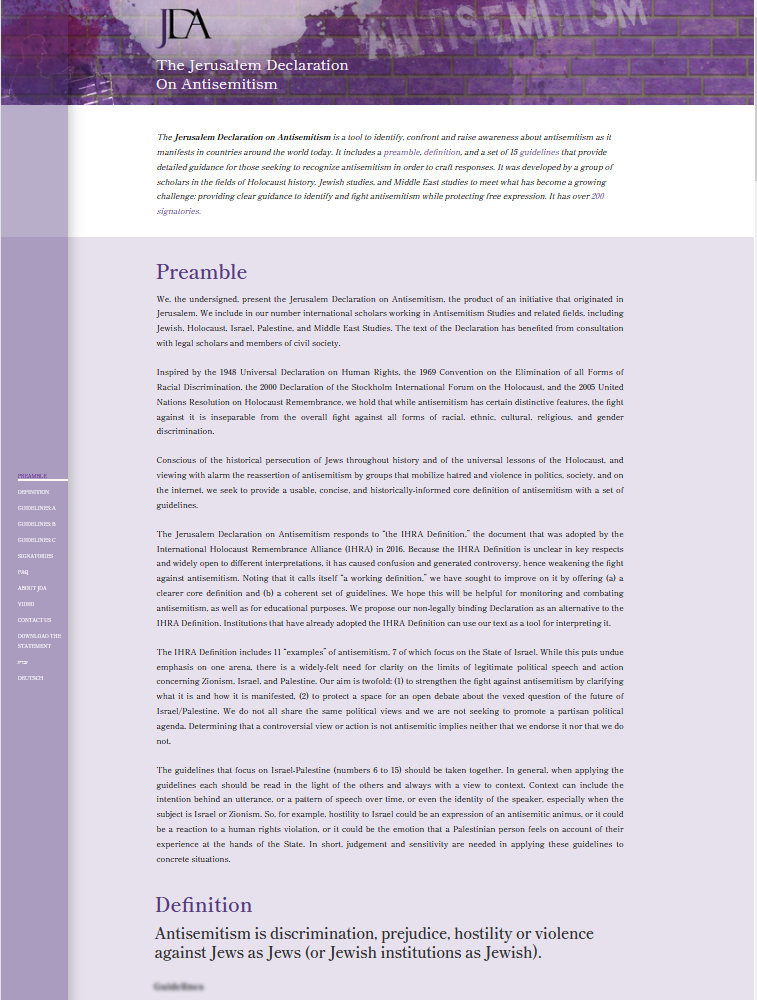 The Declaration’s authors charge the IHRA definition with weakening the fight against antisemitism by causing confusion and generating controversy. They define their intent as  meeting “what has become a growing challenge: providing clear guidance to identify and fight antisemitism while protecting free expression.” They are explicitly offering “an alternative to the IHRA definition”.

Their own definition is admirably more concise and precise: “Antisemitism is discrimination, prejudice, hostility or violence against Jews as Jews (or Jewish institutions as Jewish)”.

It ties itself explicitly to universalist human rights and anti-discrimination arguments stating that: “…while antisemitism has certain distinctive features, the fight against it is inseparable from the overall fight against all forms of racial, ethnic, cultural, religious, and gender discrimination.”

They are determined to assist people and institutions to craft effective responses to real antisemitism, while simultaneously upholding free speech on Israel, Palestine and Zionism, and not allowing Palestinian voices to be stifled.

They have provided a set of 15 guidelines about what is, and what is not, antisemitism. These are elucidated further in the declaration’s FAQ section which states clearly that supporting Palestinian demands for justice, criticising or opposing Zionism, arguing for political arrangements in the area between the Jordan river and the Mediterranean “whether in two states, a binational state, unitary democratic state, federal state” are not, on the face of it, antisemitic. It applies that formulation also to comparisons of Israel “with other historical cases, including settler-colonialism or apartheid”, and, importantly, to BDS campaigns.

It states that their declaration “is not designed to be a legal or quasi-legal instrument of any kind’ and it should not be used “to restrict the legitimate exercise of academic freedom… nor to suppress free and open public debate… within the limits laid down by laws governing hate crime.”

Many Jewish leftists and anti-occupation activists have received it enthusiastically, recognising that it instantly deprives pro-Zionist organisations within the Jewish establishment of their strongest weapon: they can no longer say that there is one unassailable definition of antisemitism. They can no longer justify labelling political opponents as antisemites on the basis of that single, and very skewed, definition.

The declaration has been received more cautiously by Palestinians. Some argue it is too centred on Palestine/Israel and Zionism and reinforces attempts to couple anti-Jewish racism with the struggle for Palestinian liberation. They say it fails to explicitly  identify “White supremacy and the far right” as “the main culprits behind antisemitic attacks”, despite “a passing mention in the FAQ.“ Fair comment. Most far right groups, they say, “are deeply antisemitic yet love Israel and its regime of oppression”. That’s not quite true. The older far right groups still see any expression of Jewish collective action, Israel’s government included, as representing evil forces.

What can we do with it in the here and now? Use it to educate about what is and what is not antisemitism, link the fight against real antisemitism as closely as possible with struggles against racism in general, agitate to free up the space where Palestinian voices, and critical Jewish voices too, are being unjustly silenced, and challenge the Labour Party and the trade unions to respond positively to this courageous and principled declaration.