The “Working Definition of Antisemitism” recognized by the International Holocaust Remembrance Alliance (IHRA) in 2016 is an instrument for collecting required data on and fighting antisemitism that has achieved wide dissemination. In a field of action characterized by a high degree of conceptual insecurity, the definition promises conceptual orientation by providing a basis for practical work. Indeed, with its concrete language devoid of technical jargon and its tangible examples that illustrate the concept of antisemitism using typical, recurring phenomena, the “Working Definition” has become the basis for the work of various groups of users. Moreover, the adoption of hitherto rarely examined aspects of antisemitism related to Israel provided an update for the discussion that was necessary at the time the definition was formulated (in the early 2000s). 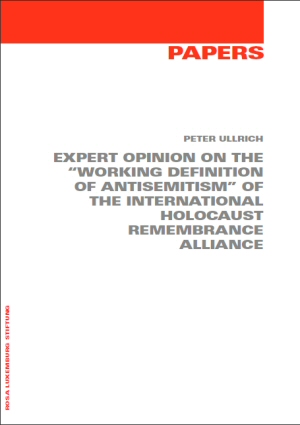 However, a closer examination also reveals severe deficits. In particular, the “Working Definition” is inconsistent, contradictory and formulated very vaguely. It therefore does not satisfy the requirements of a good definition. Moreover, the core definition of antisemitism is reductionist. It emphasizes some antisemitic phenomena and levels of analysis but largely omits other essential ones. This applies in particular to ideological and discursive aspects, for example antisemitism as a conspiracist worldview. Aspects of organizational sociology related to mobilization in movements and political parties as well as their consequences in discriminatory institutional regulations and practices are also not mentioned. Moreover, some of the examples related to Israel appended to the core definition can only be classified as antisemitic within context using further information, as what is described is ambiguous and occurs in complex, overlapping constellations of conflicts, which often do not readily allow singling out one specific problem such as antisemitism. An example is afforded by the so-called double standards. They are not sufficient criteria for distinguishing an antisemitic focus on Israel from one related to the specific features of Israeli policies and their geopolitical significance.

As a consequence, the “Working Definition” is conducive to contradictory and error-prone application in practice and leads to assessments of incidents and facts that are not based on clear criteria but on the preconceptions of those applying it or on prevalent interpretations adopted without reflection. Applying the “Working Definition” creates the fiction of an objective assessment guided by criteria. The definition provides procedural legitimacy for decisions that are in fact taken on the basis of other criteria that remain implicit and are specified neither in the definition nor in the examples.

The weaknesses of the “Working Definition” are the gateway to its political instrumentalization, for instance for morally discrediting opposing positions in the Arab-Israeli conflict with the accusation of antisemitism. This has relevant implications for fundamental rights. The increasing implementation of the “Working Definition” as a quasi-legal basis for administrative action promises regulatory potential. In fact, it is instead an instrument that all but invites arbitrariness. It can be used to abridge fundamental rights particularly freedom of speech with respect to disfavoured positions on Israel. In contrast to what the designation “Working Definition” suggests, no further development of the definition to rectify these weaknesses is occurring.

The bottom line is that the attempt to solve problems of general conceptual clarification and universal applicability by means of the “Working Definition of Antisemitism” must be seen to have failed. Mainly due to its technical weaknesses, the deficient practice of its application, its nevertheless partly binding legal status and its potential for political instrumentalization with problematic implications for freedom of speech, the use of the “Working Definition of Antisemitism” cannot be recommended. A potential exception could only lie in narrowly defined pedagogical contexts. As the genesis of the “Working Definition of Antisemitism” and its wide dissemination indicate, there is— not least in view of the persisting threat from current antisemitism—a great need on the part of various institutions for practicable criteria for identifying antisemitic phenomena. The development of clear and context-specific instruments for practical application is therefore urgently recommended.