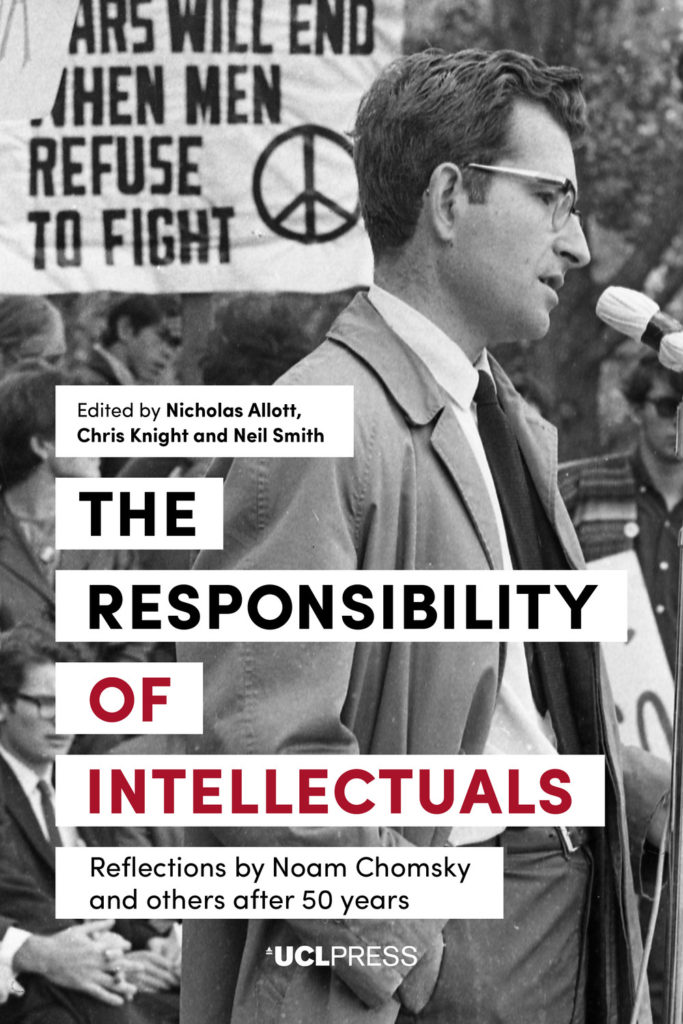 University College London (UCL) has resisted pressure on them to cancel their hosting of the launch of a book their press is publishing The Responsibility of Intellectuals: Reflections by Noam Chomsky and others after 50 years . However, they have conceded ground to the unwarranted allegations that the event will provide a platform for antisemitism by asking for prior sight of presentations and describing a list of items they presume to be antisemitic. Their banned topics go beyond even the IHRA’s possible examples of antisemitism. They represent a gross breach of academic freedom and legally protected free speech.

There is clear documentary evidence, over a number of years, that innocent comments have been misrepresented as antisemitic. As a result, the authors of these comments have suffered personally, politically and in their careers because of these allegations.

It would be antisemitic to accuse Jews as a group of engaging in such activity. However, particular groups that purport to represent all or part of the Jewish community have undoubtedly done just that. For example, the Jewish Labour Movement and the Campaign Against Antisemitism have actively campaigned in this vein; the Jewish Chronicle regularly publishes alarmist articles founded on a tenuous factual basis; and individual prominent Jews have incited the hounding of their antagonists on spurious grounds of antisemitism. They have been joined in this by many non-Jews as individuals or through groups such as various ’Friends of Israel’ organisations.

One egregious example is provided by Margaret Hodge who claimed, ‘I alone put in over 200 examples [of antisemitism] … from Labour’. Examination of her complaints showed that her examples came from only 111 individuals, of whom only 20 were members of the Labour Party.  Her claim attracted much publicity; the exposure of its vastly inflated nature far less. Her claims can fairly be described as both exaggeration and weaponization. It cannot be antisemitic to rebut such claims.

It is difficult to imagine a context where claims that the figure of 6 million Jews murdered in the Holocaust is untrue are not made for antisemitic purposes. They are totally distinct from challenging claims that the Holocaust gives a moral right to an exclusionary and supremacist state in Israel/Palestine. Such challenges are fair and unexceptional interpretation of the political use of historical facts. Similarly, commentary on the use of the history of European antisemitism to rule out criticism of the actions of the Israeli Government and armed forces as illegitimate is not, without other evidence of ill-intent, antisemitic. All countries, all communities can be accused of ‘exploiting’ events from their history for contemporary political purposes: we need look no further than the current EU membership campaigns.

There are accusations that would be wrong when applied to Jews as a collective, as being essential to their Jewishness. Assuming they are also wrong when targeted at ‘particular sections’ is a sleight of hand. There may be groups or organisations of Cypriots, to choose a random example, who are seeking to induce the British Government into courses of action that are more favourable to Cyprus than to Britain. Such groups may even be ‘controlled’ by the Cyprus High Commission. Pointing this out would not attract obloquy while extending this to all British Cypriots would be clearly racist. Equally, discussing the activities of Jewish groups who appear to place undue emphasis on Israeli interests must not be prohibited

Jews are vulnerable to attacks on their persons and property: denying this would be to ignore clear evidence, be perverse and antisemitic. It is no less, and no more, toxic than other forms of discrimination and racism. It is not antisemitic to observe that Jews are far less the victims of police harassment than visibly black groups or that clearly Islamophobic utterances seem to attract less social condemnation than antisemitic ones when they should be treated with equal seriousness.

This is an injunction that we would largely agree with. It must not, though, be used to prohibit the exploration of the involvement of specific Jews or identified groups of Jews with, for example, the financing of the slave trade when it is quite permissible to explore the role of Bristol or London merchants in this trade. Attempting to pretend this provides evidence of some inherent negative Jewish traits is antisemitic. In contrast, historical investigation of specific historical circumstances is legitimate academic activity.  Indeed, the particular role that Jews were enjoined to fulfil by the laws of Christian European rulers and states is a field of interest to many Jewish scholars.

Even the exemption that UCL posits is highly problematic

UCL is clear that it is not antisemitic to:

Reference to ‘the specifically Jewish nature of Israel’ is confusing. Israel describes itself as a Jewish state, that is its raison d’être; reference to that is unavoidable. Ascribing the human rights abuses inflicted by the state to some imagined inalienable feature of the Jewish character would, of course be antisemitic and unacceptable.

If I’d been asked, I would have rejected all of these conditions, for two reasons. First, why bring up anti-Semitism and not Islamophobia, white supremacy, and other serious forms of racism? Second, these conditions are an utter outrage. Take the first, stating that it would be antisemitic for anyone to say or imply that any Jewish group has ever exaggerated incidents of antisemitism in the Labour Party or elsewhere. I’m frankly at a loss for words. Would it be anti-Arab racism to say that some Arab group has exaggerated incidents of anti-Arab racism? If so, I’m a hardened Islamophobe, because I know of such cases and have often said so. And so are all journals and commentators on the Middle East, because such behaviour is common — for other nationalist groups as well. Why are Jewish groups immune from criticism, alone in the world? Beyond that there happens to be solid record of exaggerating incidents of antisemitism in Labour. Greg Philo’s recent study documents this in extensive detail.

Leading human rights lawyer Geoffrey Bindman, who is also a visiting professor of law at UCL, has written:

I entirely understand and share the desire to exclude antisemitism in any form from the launch of the Chomsky book – or indeed any other UCL event. I also agree that the third,fourth and fifth “tropes ” listed in the guidelines are  objectionable. I also wholly endorse the final statement on what is not antisemItic.

I do not believe such guidelines are desirable, however, though entirely well intentioned, because they have a deterrent effect on free expression,regardless of their specific content. I also question the first two “tropes”.  If there is evidence to support either suggestion I cannot see why it should be excluded from discussion. There is undoubtedly a conflict among Jews in Britain (of which I am one) as to whether criticism of Israel or Zionism is ipso facto antisemitic. Some Jews believe – doubtless sincerely –  that it is. There are individuals and organisations,  such as the Jewish Board of Deputies, the Jewish Labour Movement,  and the Campaign against Antisemitism  who have arguably supported the  suggestions mentioned in the first “trope”, and possibly the second. It would be wrong in my view to exclude discussion of such issues where backed by evidence.

We have learned that UCL’s management have placed additional constraints on the launch, despite it being hosted by one of their own professors, to impede its effectiveness as an environment for sharing ideas, including: restricting it to a small room; barring the press; and imposing their own chair.