On 5 April, centre-left think-tank ‘Progress’ chief Richard Angell launched his ‘eight point action plan on antisemitism,’ point 1 of which is for all National Executive Committee (NEC) members to be ‘trained on modern antisemitism by the Jewish Labour Movement (JLM),’ which is World Zionist Organization-affiliated and the British arm of the racist Israeli Labour Party.

The Progress ‘action plan’ had strong support from Labour Friends of Israel (LFI) Officers, including Joan Ryan MP, LFI chair, Michael Dugher MP, Rachel Reeves MP and John Woodcock MP (see their endorsements below). A small-time player during the Thatcher years, LFI found staunch allies in the Labour government in the shape of Blair, Brown and Straw. The influence of the committee was evident in Blair’s frequent comments in support of Israel, particularly at a time when its actions were widely condemned. Read more about LFI’s role in the party, since the Blair years here.

As David Cronin wrote in an Electronic Intifada Lobby Watch article on in August 2015, there is a strong overlap between Progress and LFI:

Labour Friends of Israel became a key pressure group during the Blair years. Joining it was considered almost mandatory for ambitious members of parliament.

It is also a simple fact that there has been a strong overlap between it and other groups linked to the party — notably the Blairite “think-tank” Progress — dedicated to narrowing the policy difference between Labour and the traditionally more right-wing Conservatives.

A Corbyn victory would certainly discomfit LFI. But I think it would be premature to pen that group’s obituary. Regardless of who becomes leader, there will still be a sizeable Blairite wing in Labour. LFI will be able to rely on its support at least for the near future.

Is this fabricated ‘antisemitism crisis’ an indication of LFI’s strength or weakness?

As this Crooked Timber post on the ‘crisis’ concludes:

… nothing hardens minds faster than seeing a friend run out of a job over a bullshit scandal. In my assessment, a lot of the people involved in these sorts of campaigns are intelligent enough to have been very successful in their private life, intelligent enough to have done well in student politics, and even sometimes in national politics (although very rarely in elected office), but not quite bright enough to realise that it is amazingly toxic to your long term credibility if you a) very blatantly choose your targets and timing based on political convenience and b) don’t bother to pay even token lip-service to consistency and literally simultaneously campaign for the strictest sanctions on anti-Semitic gaffes while also campaigning for the free speech of quite virulent Islamophobes…

The UK has one of the world’s biggest and best media industries and a lot of very good PR people. And so you regularly get launches of a somewhat odd kind of campaign, which has a four stage life cycle. First, it launches as a campaign about antiSemitism in British life. Second, it decides that the best use of its resources is to monitor the British media for antisemitic tropes. Third, it starts mission-drifting into straightforward defence of Israeli policy. Finally, it falls apart acrimoniously as Israel has just invaded somewhere and the members of the campaign disagree about the extent to which they are prepared to provide unconditional support to the resultant war crimes. In the mean time, at the same time as the official communications arms of the IDF are ramping up their efforts, their amateur hangers-on and wannabes are also taking to the keyboard[4], and it becomes inevitable that genuine complaints about anti-Semitism get linked in everyone’s mind with obvious attempts to provide apologia for war crimes…. 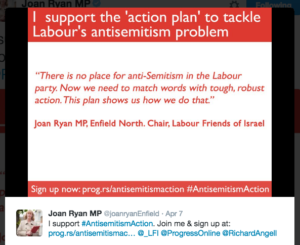 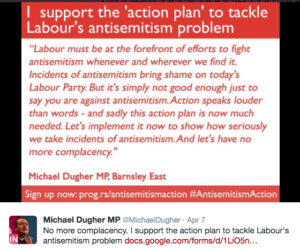 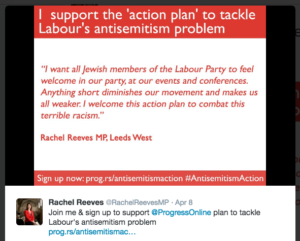 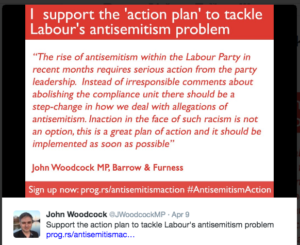