St Peter’s College, Oxford Student Committee (their JCR) agreed a hostile and inaccurate motion about a College invitation to Ken Loach to lecture on film-making . It attempts to use the IHRA working definition of antisemitism to justify censorship of one of Britain’s leading artistic figures.

Most belligerently, the students take the wide circulation of allegations that Loach’s statements in support of Palestinian Rights are antisemitic as proof of their accuracy. It is striking that they do not bother to quote anything they believe is offensive and argue for their belief; in their eyes Loach is guilty because his detractors claim he is. END_OF_DOCUMENT_TOKEN_TO_BE_REPLACED

Chris Williamson is an outspoken socialist and supporter of the Corbyn project, so it is no great surprise to find him the subject of a witch hunt. A campaign that has now led to threats of violence to prevent him speaking. END_OF_DOCUMENT_TOKEN_TO_BE_REPLACED

A new song by Leon Rosselson

FSOI has just sent this letter to Angela Rayner, Shadow Education Secretary, in response to the Board of Deputies attempt to censor her for citing Norman Finkelstein.

I am writing on behalf of Free Speech on Israel, a Jewish led and largely Jewish group concerned that antisemitic incidents are identified accurately and dealt with but that inaccurate accusations are not used to silence needed discussion of events concerning Israel and Palestine.

We read with concern that you had been put under extreme pressure by the Board of Deputies to apologise for citing Norman Finkelstein’s book ‘The Holocaust Industry’. Professor Finkelstein’s book is indeed controversial and there are few who would agree with every point of his argument but his central theme is clear and robust.

END_OF_DOCUMENT_TOKEN_TO_BE_REPLACED

Nada Elia reflects on campus censorship and how voices for Palestine are silenced on Campus while pro-Israel views are allowed an open platform. She compares the behaviour of university administrators with that of cops who mange to take white shooters alive but routinely kill black ones.

Reprinted from Mondoweiss by permission of the author

Last week, I was asked to speak in a classroom alongside someone from StandWithUs. Apparently, the professor was going by a recommendation to have me as a discussant, to possibly provide the “other side.” Without getting into a discussion of what those two sides are (pro-apartheid and pro-justice, of course), or why I will not be party to normalizing, (setting up the illusion that “both sides” are equal, rather than oppressor and oppressed, occupier and occupied), I sent this response, which I tried to keep short and to the point. END_OF_DOCUMENT_TOKEN_TO_BE_REPLACED

First PC 1773 had a go. Mr Gregson, a Labour activist of some 30 years standing, had spent 3 days at home making the banner using his own A4 printer and sticky-backed plastic, no small feat. He’d travelled down from Edinburgh the night before just to promote his petition at tinyurl.com/israelihra and was up at one of the entrances to Liverpool Dock on Sunday at 8.30am, with his banner erected, handing out flyers as 3,000 delegates and visitors arrived . END_OF_DOCUMENT_TOKEN_TO_BE_REPLACED

There has been no clear statement from the Guardian as to why this sharp but fair condemnation of the insouciance of the two prime ministers is antisemitic. This has resulted in speculation that placing Razan in the fireplace (the focal centre of the press photo) has been interpreted as an insensitive allusion to the Nazi crematoria. END_OF_DOCUMENT_TOKEN_TO_BE_REPLACED 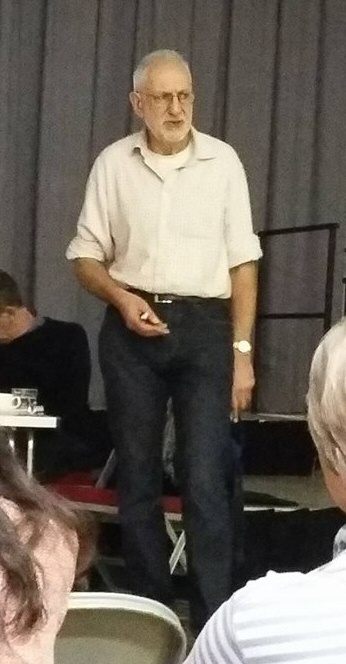 I was born of a Jewish mother, which under Jewish law is definitive even if I had not been circumcised, as I was, eight days later. I was Jewish enough to go to cheder every Sunday to learn about Jewish history and fail to learn Hebrew – but then on the other six days I also failed to learn French. END_OF_DOCUMENT_TOKEN_TO_BE_REPLACED

This letter appeared in the Guardian on 29 December 2017

The minister seems to have “no-platforming” by student unions in his sights. However, there is a major free-speech failure by the universities themselves that is easier to fix. For some years now universities, not the student unions, have been routinely obstructing campus events that focus on Palestinian rights and their denial by Israel. The government’s own adoption of the discredited IHRA definition of antisemitism a year ago has fuelled this, with play-safe administrations seemingly unclear about the difference between anti-Zionism and antisemitism. It was Jo Johnson himself who instructed Universities UK to send this definition round to all universities – with a pointed suggestion that they adopt it for internal use. No single act in recent years has been less helpful to free speech in universities. END_OF_DOCUMENT_TOKEN_TO_BE_REPLACED

This dossier records some of the more prominent cases of restriction of freedom of speech or assembly related to criticisms of the state of Israel that occurred during 2017. In some cases the document produced in May 2016 by the International Holocaust Remembrance Alliance (IHRA) as a definition of antisemitism, and adopted by the UK government in December of that year, is explicitly cited in support of the action taken. In all cases the awareness of that government action has provided the pervasive atmosphere, chilling to free speech on Israel/Palestine, in which these decisions were taken.
The IHRA definition has been used to press for and achieve the cancellation of events denouncing Israel’s oppression of Palestinians and violations of human rights. The use of the IHRA definition in such instances is commonly framed around the following narrative: “These events typically apply double standards towards Israel that are not applied to other countries and effectively deny Israel any right to exist by treating it as an inherently racist endeavour. As such, they conflict with the IHRA definition.” (quote from spokesman for UK Lawyers for Israel – UKLFI).
In the UK, student events organised on campuses have been particularly targeted, following a letter sent by the Universities and Science Minister Jo Johnson to UK universities in February 2017 to outline the government’s concerns about antisemitism on campuses, especially around Israel Apartheid Week due to take place that month, and asking for the IHRA definition to be disseminated throughout the academic system.