The publication of the EHRC report on ‘Antisemitism in the Labour Party’ was a seismic event in the history of the Party. Despite its undoubted political impact, it contributed little to anyone’s understanding of how the Party works; how antisemitism manifests itself in contemporary Britain; or how to combat it or any other form of identity-based hatred.

Jewish Voice for Labour published a series of commentaries on the shortcomings of the report but also promised an in-depth appraisal of it. That appraisal is now published by Verso as a free e-book ‘How the EHRC Got It So Wrong: Antisemitism and the Labour Party’ END_OF_DOCUMENT_TOKEN_TO_BE_REPLACED

It was difficult to ascertain on the basis of media reports whether Brighton played host this month to a Labour Party conference or a Nuremberg rally. This article investigates claims of antisemitism at the Labour conference and finds them to be without factual basis. 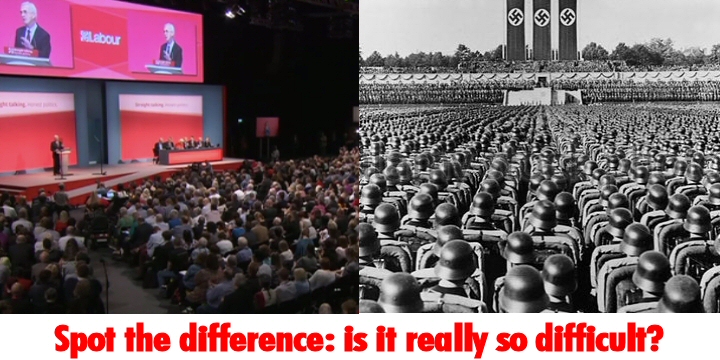 The 2017 Labour Party conference was a success for supporters of the Palestinian struggle for self-determination.

Party leader Jeremy Corbyn snubbed a reception held by Labour Friends of Israel, a group which lobbies for close UK-Israel relations, and put enjoyably little effort into his excuse. According to the Telegraph, this ‘was the first time in over two decades that a Labour leader has not attended the annual event’.[1]

Delegates cheered as Corbyn’s keynote speech pledged ‘real support to end the oppression of the Palestinian people, the 50-year occupation and illegal settlement expansion and move to a genuine two-state solution of the Israel-Palestine conflict’.

Most significantly, the leader’s office defeated a back-door attempt to neuter the party’s support for Palestinian rights: END_OF_DOCUMENT_TOKEN_TO_BE_REPLACED

Jewish Voice for Labour must be greatly encouraged by the reception it received at Labour Party Conference.

As a brand new organisation with very limited resources and no paid staff, they did not anticipate the scale of its impact. Its launch meeting attracted over 300 people when JVL had been doubtful about filling a room that seats 180. As well as attracting many conference delegates, leaders of two trade unions, Unite and ASLEF, attended and pledged their support. In addition to stimulating speeches, brimming with, fact and ideas from leading Israeli academic Professor Avi Shlaim, retired Appeal Court judge Sir Stephen Sedley and respected Jewish socialist activist David Rosenberg, the audience heard from leading film maker Ken Loach who spoke from the floor.

The message from all the speakers was clear, consistent and enthusiastically welcomed by the audience. There are Jewish voices that the Labour party is wilfully ignoring. The party needs to listen attentively to the whole of its Jewish membership and not just those individuals and groups who defend Israel’s crimes against humanity; its occupation of Palestinian land; and its increasingly Apartheid-like regime. The message of the meeting was clear: that antisemitism is as unwelcome in the Labour Party, as it should be everywhere; but that criticism of Israel and support for Palestinian rights is not antisemitic. Rather, JVL continues the long tradition of Jewish defence of the oppressed and recognition of the humanity of all. As descendants of victims of oppression over centuries all Jews should join with JVL in denouncing injustice.

The impact of JVL was not only at the fringe of conference. Leading JVL members Naomi Wimborne-Idrissi and Leah Levane roused conference to its feet with their calls for justice and peace in Palestine and for just procedures inside the Labour Party. Their reception paved the way for Jeremy Corbyn to pledge the Party to support Palestinian rights.

Why the rule change is inadequate and dangerous

JVL applauds the Labour Party’s renewed concern with combatting discrimination within the Party and in wider society. They recognise this has been central to Jeremy Corbyn’s entire political career. While the agreed measure on this topic avoids some of the worst features of other proposals circulated, JVL is concerned that the rule change adopted may not be effective in advancing that cause and fears its misuse. It can be seen that JVL’s anxieties are around four issues.

Firstly, the rule change does not spell out how to embody the recommendations of last year’s Chakrabarti report including that there should be no trawling of ancient social media postings in the hope of targeting specific individuals; and that all processes of investigation and discipline must be transparent and follow natural justice norms. Previous experience has been of selective vision; perverse textual interpretations; opaque procedures; and media vilification preceding hearings. The Party must determine to end such abusive ways of working.

Secondly the procedures for drawing up the code of conduct have not been specified. JVL expects that the NEC will consult with all groups that may experience discrimination and with all currents of opinion within these groups. A draft of the code must be circulated to all local parties. It is a lesson from all anti-discrimination initiatives that unless there is wide involvement from the start there is no ownership of the final process and failed implementation. There are particular issues with regard to the antisemitism aspect of the code. Over the last 18 months, criticism of Israel has, too often, been taken as evidence of antisemitism in Party disciplinary cases. The code must not include proposals that would brand anti-Zionism as antisemitism. We have seen too many examples where fear of being labelled antisemitic has silenced voices that, while critical of Israel, are in no way antisemitic. The code of conduct must not be used as a way to smuggle in a draconian reading of the IHRA (mis)definition of antisemitism.

Fourthly, the new rule does not lead to a distinction that Chakrabarti clearly alluded to. Some unacceptable statements arise from ignorance and confusion and need to be addressed through education to lead the perpetrator to understand the negative consequences of their actions. Other statements and actions arise from malice and are the proper domain of disciplinary action. Neither type of hurtful action is acceptable but the way to deal with them, and to build a stronger, more inclusive party, vary.

JVL must look forward to building on its progress in Brighton and its boost in membership. It has committed itself to playing its role in strengthening the Labour Party and securing the Labour Government pledged to achieving the domestic and international justice that we desperately need.

FSOI have just issued the this statement in response to the spate of attacks on us following our successful meeting in Brighton. It is a tribute to our growing effectiveness that so much abuse is being hurled at us.

Allegations that have been made that Free Speech on Israel, a Jewish-led organisation, is complicit in holocaust denial are a signal episode in the manufacture of fake news.

They are distortions based on highly selective quotations, ripped out of context, from a strong and principled speech by celebrated Israeli Army veteran and author Miko Peled at our fringe meeting at the Labour Party Conference in Brighton. These allegations, too readily re-broadcast by an insufficiently critical press, misrepresent the meaning and intention of his talk. His words, read in the flow of his speech, offer no support at all to holocaust denial. These tactics of attempted entrapment and character assassination tarnish the integrity of political life in Britain.

Free Speech on Israel always challenges Holocaust denial whenever it rears its head, just as we are resolute in our opposition to antisemitism. Like Miko we are equally determined to fight false accusations of antisemitism and their use to silence criticism of Israeli crimes or to suppress support for Palestinian rights.

How Israel Silences Its Critics: Why We Oppose the Witch Hunt 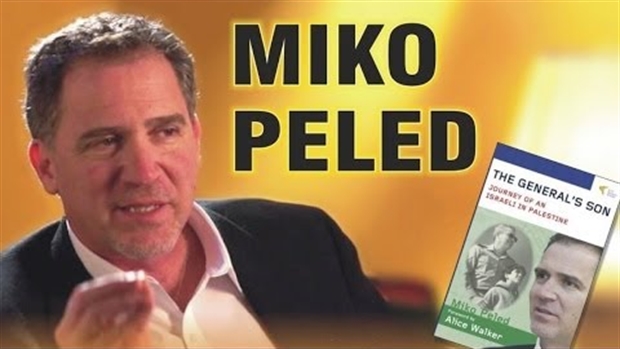 END_OF_DOCUMENT_TOKEN_TO_BE_REPLACED

This is a copy of a letter sent by Jewish Voice for Labour to a council considering adopting the IHRA (mis)definition of antisemitism. We hope it may be of use to you if your local council is thinking of proceeding down this misguided path.

As Jewish members of the Labour Party, and of the new Labour group, Jewish Voice for Labour, we are opposed to adoption of the International Holocaust Remembrance Alliance (IHRA) working definition of antisemitism due to be tabled before the council on Monday September 18.

We believe the IHRA document sows confusion in the fight against antisemitism and racism, which must be a key priority at this time of rising right-wing hate-mongering against ethnic and religious minorities. We also believe it poses a threat to freedom of expression, which it is a key duty of local authorities to protect.

We understand that councillors may feel obliged to endorse the motion out of a commendable desire to support and defend Jewish constituents, but in our opinion this would be misguided. The short definition of antisemitism contained in the proposed motion is, in our view, poorly worded and indefinite, but it is the rest of the document that seriously concerns us. The greater part of it is made up mainly of examples which do not relate to Jews at all, either individually or collectively. They relate to attitudes to the State of Israel.

We urge you to read the assessment by our friends in the Jewish Socialists’ Group, which can be found here. There is also a full assessment of the legal implications of the definition from Hugh Tomlinson QC here, as well as a scathing critique from (Jewish) former Appeal Court judge Sir Stephen Sedley in the London Review of Books here.

Antisemitism may sometimes be masked by a critical attitude to the State of Israel, that is true. The IHRA definition, though, seems designed not so much to catch speech or actions clearly motivated by hatred of Jews, as to defend the State of Israel against criticism of its violations of human rights, and to justify aspects of its foundation and constitution opposed by many Jews, both within and outside Israel. We know of many disturbing cases of the IHRA document being used to limit criticism of Israel and restrict campaigns in support of justice for Palestinians. The legal opinion from Hugh Tomlinson QC makes clear that public bodies using it in this way, including against the boycott movement, would be open to legal challenge for breaching their duty under the Human Rights Act to defend freedom of expression.

Councillors should be aware that the Labour Party has only adopted the short definition of antisemitism, which was included in the Race and Faith Manifesto during the 2017 general election. We are pleased that the party has not adopted the list of examples which follow the definition in the IHRA document. Nor should your council.

We appeal to you not to allow yourselves to be bounced into an ill-considered decision which will do nothing to oppose real antisemitism, and is likely to have negative consequences for the perception of the Council by many anti-racists and supporters of the rights of Palestinians.

We look forward to the opportunity to engage in productive discussion with council members about these important issues.

Naomi Wimborne-Idrissi
on behalf of
Jewish Voice for Labour