Point 8 of Progress’s action plan on antisemitism, urges Labour members to ‘join JLM – affiliated to Labour since 1920 – as an associate member. It needs your solidarity more than ever.’ JLM have also produced a Proposed Rule Change – Constitutional Amendment, to ‘Strengthen the rules against members who engage in antisemitism, Islamophobia, and racism.’ 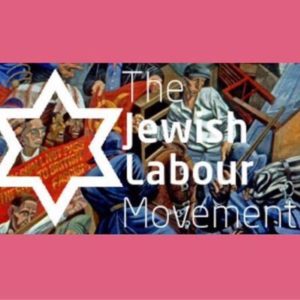 The Jewish Labour Movement, founded in 2004, is the successor organisation to Poale Zion (founded in 1905), and the British section of the pro-apartheid Israeli Labour Party (ILP or ‘Havoda’ in Hebrew).

Neve Gordon wrote in February of a newly adopted plan by the Israeli Labour Party:

The Labor Party, which is the only viable alternative to the current Likud government, and which is considered by many both in Israel and among international leaders to be a progressive substitute, has, in other words, unanimously supported a plan that would have  been applauded by Apartheid South Africa.

Labor’s premier Herzog laid out his vision a few weeks earlier at the Institute for National Security Studies in Tel Aviv, telling the audience that he

wish[es] to separate from as many Palestinians as possible, as quickly as possible.

Herzog continued by explaining that

we’ll erect a big wall between us. That is the kind of co-existence that is possible right now… Ariel Sharon… didn’t finish the job. We want to finish it, to complete the barrier that separates us.

Examining Labor’s new plan more closely, what becomes bitterly clear is that “We are here, they are there” does not signify the withdrawal of Israeli power from Palestinian territories, but rather a devious way of entrenching the colonial enterprise even further.

JLM is also affiliated to the World Zionist Organization (WZO) – according to the UN, WZO pumps millions into building in the occupied West Bank through its settlement division. JLM is an affiliate of the World Labour Zionist Movement and supports the Jerusalem Programme (JP) of the WZO. The JP website lists the ‘foundations of Zionism’ as including ‘The unity of the Jewish people, its bond to its historic homeland Eretz Yisrael, and the centrality of the State of Israel and Jerusalem, its capital, in the life of the nation.’ Israel has illegally annexed East Jerusalem and adopted a law on July 30, 1980 which proclaimed the city its ‘eternal capital.’ This action was condemned by the UN Security Council in its resolution 478, August 20, 1980.

Yitzhak Herzog (also known as Isaac Herzog), leader of ILP said that Israel’s Labour party shouldn’t give off the constant impression that they are ‘Arab lovers.’ He has since sent a letter reprimanding Corbyn for tolerating racism in the Labour party.

As Orly Noy has reminded us in her article on +972:

In the early state years, and even before that, it was Labor’s forebears who determined Israel’s relationship with its Arab citizens. The military administration of Israel’s Palestinian community, abolished only in 1966, wasn’t the brainchild of the right. And as Balad MK Jamal Zahalka pointed out, right-wing government built settlements alongside Palestinian villages, while the spiritual leaders of the Labor Party built theirs on the ruins of the villages that were depopulated and demolished in 1948.

And we must not think it’s all ancient history. The most disastrous rift in the history of Jewish-Arab relations in Israel was ushered in 2000, during Ehud Barak’s premiership, when police shot live rounds at Palestinian citizens of Israel, killing 13. At that moment, the entire community was marked as enemies of the state.

The Jewish Labour Movement (JLM) together with Labour Friends of Israel (LFI) is the emanation of the Israeli state inside the Labour Party. Its attitude to the new leadership was best summed up by Rebecca Simon Vice-Chair of LFI who said of Corbyn: ‘no one wants to vote for a leader they think is rubbish.  And he is rubbish – never mind about the Israel stuff, he is just not a credible opposition.’ JC 30.12.15.

The purpose of LFI and JLM is to justify the actions of the Israeli state, whomsoever is in power. The Israeli Labour Party has never condemned the occupation. As former leader, Shelly Yacimovich  declared: ‘I reject the definition of the IDF as an occupation army,’ [Ha’aretz 16.4.16.] Justice According to Israel’s Nationalist-demagogue Spokeswoman. Ha’aretz described how ‘She doesn’t give a damn about the Palestinians’ rights. They’re nothing to her. …. This is justice according to Yacimovich – for Jews only. Her justice is “Zionist,” as she calls it. Her morality isn’t universal. Calling her a social democrat is a disgrace to social democracy. Her disgraceful take on the Palestinians has nothing to do with socialist or democratic tradition. She’s a nationalist-socialist leader.’

The idea that JLM or LFI are going to ‘build bridges’ with the Jewish community is far from convincing.

The JLM is moving an amendment to Labour Party’s rules to include ‘anti-Semitism’ in the list of disciplinary offences. They are also using Islamophobia as a cover for their amendment. They make it clear, in their supporting arguments, that their definition of anti-Semitism includes opposition to Zionism which they say is part of Jewish national identity.

For the defenders of apartheid in Israel to move an amendment concerning racism in the British Labour Party should be cause for alarm.

Yitzhak Herzog explained to activists in April how the Zionist Union needed to act to stem the loss of votes to parties even further to the right: