Rob Ferguson presents the third of our series of posts on the Jerusalem Declaration on Antisemitism (JDA) He demonstrates its importance in the  fight for free expression on Palestine and Israel and defending the left and opposing the use of the IHRA Working Definition of Antisemitism.

The Jerusalem Declaration on Antisemitism (JDA) is a highly welcome development. Its key significance lies in its potential for mobilising significantly wider opposition to the International Holocaust Remembrance Alliance (IHRA) “working definition” of antisemitism, and attempts to de-legitimise free expression on Israel and solidarity with Palestine. 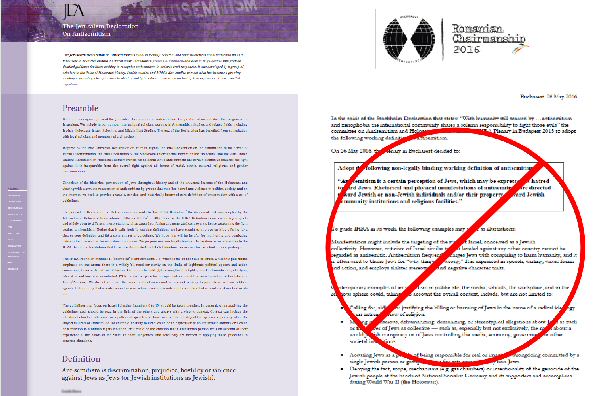 Three features stand out.  First, the JDA  provides a weighty, clearly expressed counter to the IHRA; second, the JDA re-centres the genuine meaning of antisemitism; third, the authors and 200 signatories are leading Jewish scholars of repute, reflecting a range of views on Israel, Palestine and Zionism.

The JDA definition itself is concise but powerful:

Antisemitism is discrimination, prejudice, hostility or violence against Jews as Jews (or Jewish institutions as Jewish)

The 15 guidelines that accompany the definition address essentially what is, and what is not antisemitism, with a principal focus on Israel and Palestine.

In assessing the significance of the JDA an important distinction has to be be made between i) resisting de-legitimisation and ii) making the argument for Palestine. These aspects are related but should not be conflated. Opposition to the former is not identical to agreement on the latter.

Opposing adoption of the IHRA working definition and the JDA

Effectively opposing the adoption of the IHRA by state and public institutions requires campaigns with wide support. Universities for example, form a key battleground in Britain and north America. Campaigns to oppose the IHRA will require broad support from academics, students and trade unionists who hold a range of views on Israel and Zionism. This also holds true of campaigns to defend individuals. A campaign that aims only at those who agree on a particular view of Israel, Zionism or BDS will court isolation and risk defeat.

The key red line for such campaigns is that whether or not one agrees with these views – it is not antisemitic to criticise Israel as an apartheid, racist or colonial-settler state; to oppose Zionism as a political ideology; to advocate for BDS; to call for the Palestinian right of return or for a single, democratic, secular (non-Jewish) state for all citizens. We are thus campaigning for the right to argue for Palestine, or present an anti-Zionist position.

That Palestinians should be compelled to justify their struggle for liberation against charges of antisemitism is cynical in the extreme, and a cause of justifiable outrage. It is understandable therefore that one response has been to argue against being drawn into arguments about antisemitism, on the grounds that this is simply  an attempt to divert from the issue of Palestine.

Those arguing for such a response are right to  insist that Palestinian opposition to Israel is quite separate from antisemitism.

The difficulty however is that we are facing a repressive, quasi-legal attack, deployed with significant success in suppressing free expression on Palestine itself. This makes the JDA’s systematic refutation of the IHRA, combined with its diverse authorship and list of signatories, a unique tool in building opposition to this attack.

The JDA outlines three sets of guidelines, two of which focus on Israel and Palestine. The final set comes under the heading, “Examples that on the face of it, are not antisemitic (whether or not one approves of the view or action)” [my emphasis]. These  include: opposition to Zionism; advocating a single unitary state that accords full equality to all inhabitants “between the river and the sea”; comparing Israel to settler-colonialism or apartheid, or campaigning for BDS. Finally the guidelines effectively refute the charge that critics of Israel are guilty of  “double standards”.

The premises of the IHRA have to be directly addressed if we are to consolidate wide opposition to its adoption. Here the signatory list is as significant as the refutation itself, giving the JDA particular force and traction. The JDA’s potential lies in its weight as a lever for mobilising opposition to the IHRA beyond the ranks of pro-Palestine activists and supporters, to resist imposition by institutions and pressure from the pro-Zionist camp.

Making the argument for Palestine

The JDA is not a substitute for campaigning over Palestine or for the Palestinian voice.  Defending free expression on Israel and Palestine is a necessary but insufficient condition of a left response. Too often over the last five years, the Palestinian voice has been marginalised or drowned out as a consequence of the internal battle in Labour.

That focus has to fundamentally shift. In the Labour Party, argument over the IHRA counted for little; the outcome was ultimately determined by the parliamentary party and party structures, over which members had no control. In the movements and in the public political space, the dynamic is different; here the left and Palestine activists can intervene, mobilise, shape the debate, win arguments and positions and mount campaigns.

In universities, academics, students and unions have the ability to mount collective opposition to institutional pressures and external dictats and in opposing the IHRA; furthermore, activists can open up opportunities to engage in debate with a wider audience over Palestine.

We need to force the debate onto our terrain and it is here that the JDA is important. Our opponents rely on quasi legal compulsion, laced with demonisation, to circumvent democratic process. They may live to regret their hubris.

We should seek to broaden our side, not simply defend it. The movements to decolonise education, Black Lives Matter, the campaign against the Police and Criminal Evidence Bill, over Reclaim the Streets, against Prevent and against the far right have significant support on the campuses. It is not incidental that these struggles also face concerted attempts at de-legitimisation. Here opposition to the IHRA and the broader campaign for solidarity with Palestinian fits. In universities in particular, we should seize opportunities to mobilise platforms, meetings, events, campaigns and demonstrations, to campaign for BDS, to give the cause of Palestinian freedom its voice and engage new audiences.

We should approach the JDA as a means of freeing up the space to make the case for Palestine. There is a danger of underestimating its significance in this respect. There is no contradiction in mounting a defence of free expression on Israel, alongside those who oppose the de-legitimisation of views they may not share, and in tandem – to openly campaign for Palestine solidarity.

The fight against antisemitism

The narrative of the “new antisemitism” has a pedigree going back to the 1960s and 1970s. What is specific about the IHRA working definition is not so much the narrative itself but its repressive quasi-legal status. However, in conflating anti-Zionism with antisemitism, there is another serious consequence: the degrading of the very meaning of antisemitism.

This is dangerous. The far-right and fascists promote antisemitic tropes of malign Jewish power while cloaking themselves as supporters of Israel. The IHRA strengthens the hand of the far right on one hand, while erecting barriers to unity against the real threat on the other.

The re-centering of antisemitism as “hatred of Jews as Jews” in the JDA definition is therefore important. It opens up an opportunity to engage those, including some Jews, who might be persuaded to support the IHRA on general grounds of opposing antisemitism. Unlike the IHRA, the JDA also helps in situating antisemitism within a common understanding of racism in general. Thus the first guideline asserts that:

“It is racist to essentialize (treat a character trait as inherent) or to make sweeping negative generalizations about a given population. What is true of racism in general is true of antisemitism in particular.”

There is an issue that in attempting to identify the characteristics of antisemitism at a general level, the JDA fails to emphasise the reactionary roots of antisemitism in far right, racist and fascist movements. This can appear to reinforce the focus on antisemitism as a problem of the left and Palestine. The criticisms of the JDA on this count have weight (although commentaries by authors since publication go some way to address this. See Omer Bartov, Barry Trachtenberg,  Brian Klug and David Feldman et al).

In spite of this omission, I do not think the JDA plays to our opponents’ advantage. The JDA still provides a platform from which the left can open up discussion on the roots of antisemitism, the nature of the real threat, and the need for unity.

It has been argued that defining antisemitism is not to be confused with fighting it. This is a truism; however, there is a danger that in approaching the JDA in this way we pass up a weapon for engaging that fight. The risk is we circle the wagons around over-narrowly defined positions that isolate the left from a wider audience.

The IHRA “working definition” is dangerous. It is dangerous for Jews, for the fight against racism in general, for unity against the far right. It dangerously obscures the real roots of antisemitism and the threat it presents for Jews and society today. The JDA offers a refutation of the IHRA working definition that can help in focusing the fight we all need to wage.

The JDA is of potentially major significance as a counter to the IHRA working definition of antisemitism. The overwhelming votes to reject the IHRA working definition by the Academic Board at UCL, and by students at City University (671 votes to 260 votes to reject the IHRA) are important indications of the potential to resist the assault on free expression on Israel and the attack on Palestine solidarity.

At the same time the IHRA has been used successfully to stifle debate and solidarity with Palestine. Internationally, there have been attacks on BDS, bans on artists, victimisations of academics and attacks on the right to campaign and protest.

The JDA focuses attention on the need for a wider consideration of strategy. The repressive, quasi-legal status of the IHRA requires a broad movement of opposition, albeit reflecting differences of view on Israel, Palestine and Zionism. The JDA is an important development for mounting such opposition.

There are dangers. It is important to avoid simply dissolving a campaign for free expression on Israel into abstract calls for “free speech”. Right wing ideologues and the state are using this banner to protect prejudice and bigotry from challenge, to oppose calls to de-colonise the curriculum, and to allow fascists a platform. The key issue at stake therefore in opposing the IHRA is the stifling of debate and right to protest by the state and institutions. Secondly, seeking adoption of the JDA as an alternative to the IHRA working definition is not necessarily the priority of a local strategy. In general, we should avoid a trend towards institutionalised “definitions”. As others have pointed out, these focus on language, individual behaviours and conduct at the expense of obscuring the structural and institutional racism that underpins them.

As a powerful refutation of the IHRA, the JDA unites Jewish scholars of unimpeachable credentials, Zionist, non-Zionist and anti-Zionist, giving the JDA unique weight. Its importance lies in its potential as a vehicle for mobilising a movement of opposition in universities, campaigns, trade unions and communities. The JDA does not advocate for Palestine or the case against Zionism. That is for the left to seize the opportunity and to articulate. The JDA is an important aid in that endeavour. It would be a mistake if we were to underestimate its significance.

One thought on “The Jerusalem Declaration on Antisemitism and free expression”