Chris Williamson is an outspoken socialist and supporter of the Corbyn project, so it is no great surprise to find him the subject of a witch hunt. A campaign that has now led to threats of violence to prevent him speaking.

Although much of the current round of attacks rests on a contentious mis-reading of his talk in Sheffield where he defended Labour’s record in tackling antisemitism; this was not the focus at the start.

Many of the Labour MPs who still mourn the end of the Blair and Brown eras resent Chris responding to invitations from members of their Constituency Parties to spread socialist ideas in their backyards. His Democracy Roadshow regularly attracted large and enthusiastic audiences in towns with little recent history of political education. Spreading ideas and encouraging debate did not fit with their vision of a Mandelson and Campbell style top-down Party where members were voiceless. For instance when Chris visited Barry Sherman’s Huddersfield seat he alleged Chris was ‘damaging our party’s ability to win a general election’ because, as we all know, Labour wins seats best when running on apathy.

As a socialist Chris places great weight on free speech, natural justice and equality in Britain and internationally. These concerns all intersected in his alarm about the treatment of Jackie Walker by the Labour Party; egged on and intimidated by an intense media campaign to malign her. 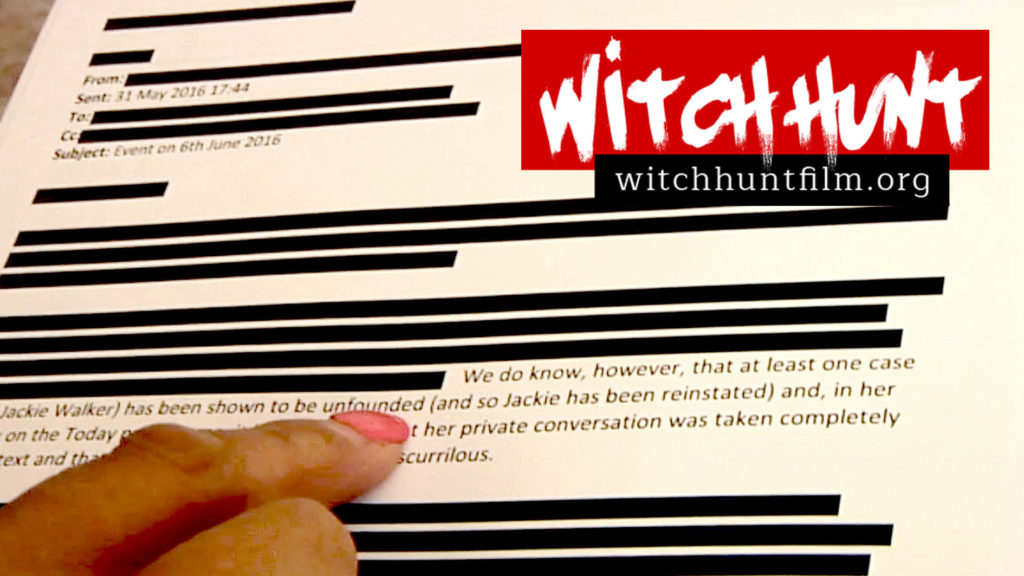 When Jon Pullman produced the film WitchHunt Chris thought it would be helpful if other MPs saw this and had to engage with a different narrative about support for Palestine and allegations of antisemitism. He wanted them to think about the process by which poorly evidenced allegations become unchallengeable ‘common sense’ which you dispute at your peril.

Inserting a deviant narrative into the Parliamentary estate infuriated many Labour MPs who saw this as an opportunity to excise a prominent Corbyn supporter. Tom Watson, never slow to grab a headline or even a paragraph on page 7, reported it to the party’s Chief Whip and General Secretary. Lilian Greenwood said Mr Williamson’s behaviour “disgusts me and brings shame” on the party. The idea that Chris was collaborating with Jewish Voice for Labour was, according to Ruth Smeeth, “a complete and utter disgrace” and an afront to British democracy. The dogpiling resulted in the cancellation of the screening.

The film, of course, is no defender of antisemitism but it is easy to believe that if you only listen to its detractors rather than viewing it. Sadly, there are those who seek to prevent that. When JVL arranged a preview of a pre-release version at Liverpool Labour Party conference the showing had to be cancelled after a bomb threat.

The bomb hoax was not the first incident to prevent a JVL meeting at a Party Conference. The previous year a Brighton Hotel cancelled a JVL booking following telephoned threats of being subject to negative reviews on TripAdvisor. A Free Speech on Israel meeting to launch a book exploring antisemitism was broken up by howling hooligans and a later meeting in Parliament could only go ahead with the considerate cooperation of the House security staff and a strong police presence.

Securing free speech and free assembly, supposedly guaranteed under UK and EU law and frequently touted as a fundamental British value, seems optional when it comes to Chris Williamson and other defenders of Palestinian Rights. When Chris was due to speak in Brighton (about modern monetary theory!), staff at two booked venues, Holiday Inn and the Quaker Friends Centre were threatened with violence and the bookings were cancelled.

The bar for preventing people speaking must be set very high: declared racists and homophobes who threaten the safety of others have no right to a platform. Blocking people just because they take a different view, even a radically different view, on a sensitive issue is no reason for censorship. If Chris Williamson is silenced he will not be the last, just another sad staging post on our descent into McCarthyism. and lower still into a violence dominated politics.

2 thoughts on “The witch hunt against Chris Williamson and WitchHunt”