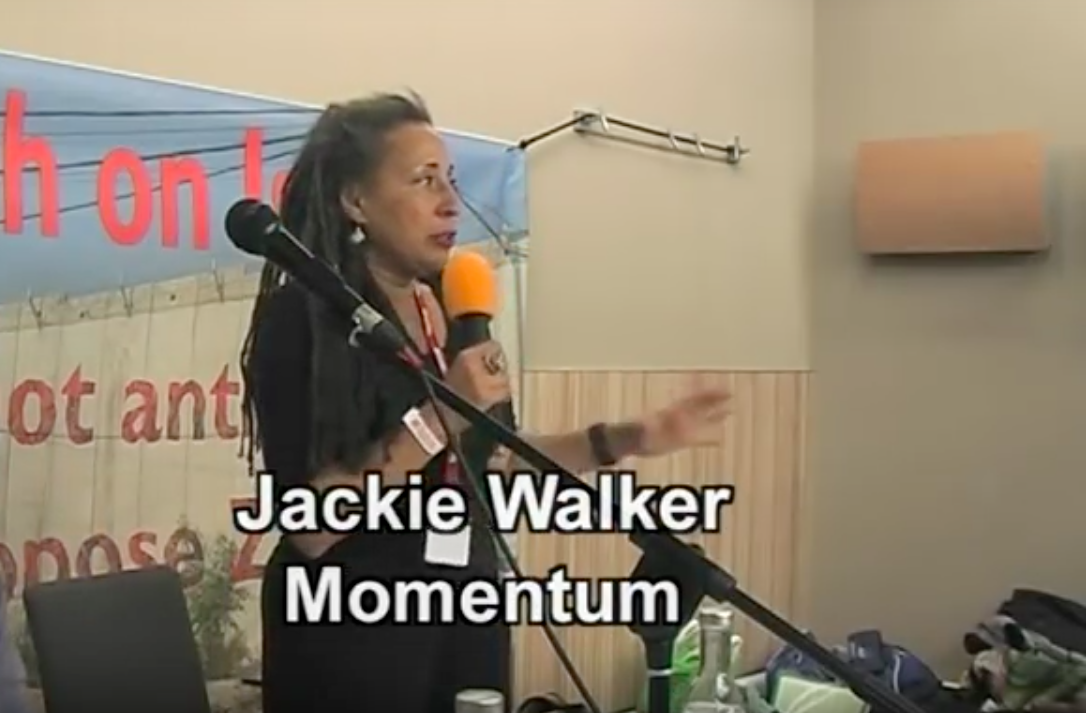 Jackie Walker was speaking at a public event titled “Jewish Socialists Against the Anti-Corbyn Witchhunt,” Sunday September 25, hosted by Free Speech on Israel.

Why I’m reading from a script.

You have a situation where the most innocuous video can be used to accuse Jeremy Corbyn of anti-semitism, where my local, once UKIP, now born again Tory MP can make public the names and faces of women suggesting that their protests outside a local arms factory making parts for Israeli drones that drop bombs on Gaza are anti-semites! Being offended is not the same as having experienced racism.

I’m asking what is the cost to us as a movement when Macpherson is taken out of context and used against freedom of speech, when, encouraged by disproportionate media attention, claims of racism are weaponised. Where Chakrabarti’s reccommendations seem to me so far to have been pretty much ignored?

Russian Askenazi father left Moscow in 1914 for the US.

Met in New York, he was a communist, like many Jews of his time. Committed to fight for the rights of oppressed groups. An Internationalist, he believed the struggle for desegregation and equality for all peoples was part of his struggle.

That proud tradition of Yiddish speaking, now mostly destroyed, of Left, universalist, Jewish intellectuals and activists, is the Jewish history I claim as mine and is what I am most proud of. And that is the history that is going to be celebrated very soon at Cable St. I’m not interested in the liberation of one section of humanity, I’m a socialist. I’m committed to the liberation of all humanity. This is what guides my politics – and it is crucial to who I am.

My parents were brought together by politics. My black mother was tortured and deported for un-American activities during the McCarthy period, the witch hunt where thought police, denunciations, media frenzy whipped up hatred to enable the Establishment to maintain their control on American society. A witch hunt that terrorized and gripped a nation, a witch hunt that saw many prominent Jews (and by the way I didn’t say all), as well as others, silenced, ostracized, removed from employment.

But to move from the general to the particular ….

My partner is Jewish and we have a number of Jewish friends and comrades. I have been a member of a number of Jewish organisations, eg  JFJFP for some time.  I have worked in and been a victim of racism all my life so you can understand my bewilderment when in May

I was suspended from the LP amidst false allegations of anti-Semitism. These allegations were lifted and addressed in parts of the Chakrabarti Report, though given continuing harassment of me you’d barely know it. I’m not responding to those allegations here but if you want to have a look at my response go to JFJFP.

We have been told Jews are terrified to go to Labour Party meetings. That women are terrified. That Momentum is anti-semitic (let’s forget that both the Chair and vice Chair and many leading figures are Jewish). I keep reading that the cause of all this terror is Jeremy Corbyn.

Interestingly I’ve also read articles claiming that racism only occurred in the Republican party when Obama was elected.

Irony is, we have never had a leader so involved in anti racism, not just in theory but in the practice of his life. It’s part of his political and personal DNA.

Interestingly, when I’ve responded to critics by pointing this out, apart from being next told ‘Corbyn’s a terrorist sympathiser’ and other nonsense, the response has then become ….. It’s not him, it’s his followers … it’s people like me….

First let me be clear, all racism is abhorrent. I’m not saying that Anti-semitism does not exist in the LP. The LP is after all a reflection of society. I am saying that claims of its significance are being exaggerated for political purposes and this has been done at huge cost to our movement, to communities and to many individual people, in and outside of the party.

I’m also saying that anti-semitism is no more ‘special’ than any other form of racism. All racisms have their own characteristics and histories. All genocides their own contexts. All holocaust denial, whether it is of the Jewish or African holocaust, is a blasphemy against humanity.

So what purpose do allegations of anti-Semitism have.

Why is it happening? Who is paying the ultimate cost?

It seems to me there is little, if any, hard evidence that the Labour party has a major problem with anti-Semitism though there is as Chakrabarti says an ‘Occasionally toxic atmosphere’.

The most fundamental aim of such allegations I suggest is to undermine Jeremy, silence his supporters, and ensure any chance of an alternative to the neo-liberal diet of cutting services and taxes that has been dished up to us as politics until Jeremy got the leadership never actually gets to the table.

Then there’s silencing any criticism, or any potential criticism, of the Israeli state, attacking and undermining anyone who supports Palestinian Rights, the BDS (boycott) movement, ensuring the flow of money and arms to Israel continues unabated and at whatever the cost.

This political use of accusations has not only weaponised anti-Semitism, it has became a weapon of political mass destruction and like all nuclear options has  entailed a high degree of collateral damage, not just to the Labour movement as a whole.

I’m drawing attention here to another, barely mentioned, outcome of this strategy.

What is extraordinary, amongst what can only described as a  tumult of accusations, is that at this point, when discussion of racism in the Labour party has the most media attention I’ve ever known, is that no person of colour, no group representing the interests of BAME people has been heard, has been allowed to insert their perspective on the debate, let alone be seen as significant to it. Black people yet again have been made invisible.

Chakrabarti of course made a number of powerful observations about the exclusion of BAME people from the party, but that voice was soon drowned out against the clamor by the press and others to eke out the story that some seem to prefer; that of anti-Semitism.

Blacks may vote disproportionately for Labour, 2:1 – what they don’t have is representation where it counts – in positions of power. This most pressing aspect of Chakrabarti’s report has not just been silenced, we are barely allowed to mention the position of BAME members in relation to Chakrabarti in case we are seen as denying a problem which, as far as I have experienced as a black Jewish woman with a Jewish partner and many Jewish comrades, exists on the margins of the party, and is certainly not reflected in who our representatives are, either within the internal structures of the party or in our representatives in parliament.

All this has been aided and abetted by the complicity of a media that at times seems rabidly –  anxiously anti-Corbyn. The Boris Johnson style racism of the Tory party that renders Johnson’s cheerful rendition of blacks with watermelon smiles as tolerable enough to see Johnson promoted to deal with the pickeninies (his description of blacks) overseas as Foreign Secretary barely causes a stir.

You really have to have a sense of humour, or a very thick skin, black or otherwise, to be involved in anti racism and politics at the moment.

And it’s no longer just the Labour right involved in the debate, it’s the right of the Tories (as in my own MP) and the far right joining together in a most unpalatable pact. Fascists in my own constituency in South Thanet, where Farage stood, turn up outside meetings, no longer goose- stepping and shouting ‘Hitler was right’, instead they feel empowered to shout ‘anti-semite’ at Labour and anti-racist activists, telling us how they now like the Jews while screaming abuse against what they call the ‘Muslamics’.

Now I’ve had to get used to harassment, and to some extent I have, but for the other victims of accusations of anti-Semitism,  publicizing their names and photos across the media and social media …. Has made the vulnerable to threats, to abuse, to threats of loss of employment and worse – it’s terrifying.

And by the way, anti-semitism is not, as my MP would have it recently, anything like a virus. It’s learned, not caught, and as such can be unlearned otherwise we would all have to give up, go and live in our separate ghettos …. Calling racism a virus is the language of separation.

Racism is about material reality. Racism is, and always has been, essentially about power.

In terms of political parties, including Labour, it is most importantly about exclusion from power, lack of representation, voices never heard.

As ever, people of colour, marginalized and oppressed for centuries, victims of genocide, holocaust, a stateless diasporic people in this and other Euro-American countries, have been effectively silenced and put into  their place – the political abyss.

So let’s understand the actions of the right, that their focus colludes with the enemies of our movement, colludes with the exclusion of people of colour from our party… and that they do this and are prepared to do this mercilessly, and with one aim in sight – to further their own political agendas.

Let’s talk about the problem about racism in the LP. Here’s my challenge to the right – if you want to talk about racism …..let’s do it, let’s have that discussion please, on a level playing field, together, all sections of the party, all minority groups, and let’s start it right now.