In London these days, Jews critical of Israel need police protection in order to hold meetings.

In November and December this year, individuals claiming to defend the Jewish community against people they view as traitors – that is, Jews who are critical of Israel – have actively organised to disrupt a series of meetings on university and parliamentary premises.

In one instance on November 14, shouting, cat-calling and loud abuse resulted in massive disruption of a meeting to launch a book about antisemitism published by the US organisation Jewish Voice for Peace. The event was organised by the campaign group Free Speech on Israel (FSOI) at the School of Oriental and African Studies (SOAS). Abuse directed at the Jewish speakers and audience members included, “You’re called traitor Jews, kapos….(“Kapo” is a label applied to Jews who helped the Nazis run the death camps.)… We’re going to challenge you and your foul race hate against Jewish people….You’re a moron and she’s an antisemite.” The last remark was addressed to one of the speakers and her sister.

Attempts by SOAS security staff to restore order after 20 minutes of chanting and flag-waving were met with cries of: “We’re engaging in genuine debate….We’re not leaving. You can call the police.” The disruptors, 10-12 in number, only left mistakenly convinced they had succeeded in closing the meeting down. Once they had left the Q&A resumed constructively although some audience members had left, fearing for their safety.  The mob had departed shouting. “We’ve made our point… We’ll be back. We’ll be back. We’ll be back.”

And indeed they were. On December 5, additional security was required in case of disruption at another meeting organised by FSOI, this time in the House of Commons. Advance booking revealed that an unprecedented number of those known to have disrupted previous events intended to join forces at Westminster for this meeting, titled Combatting Antisemitism versus Free Speech. The sponsoring MP, Tommy Sheppard of the SNP, was intent on giving rarely heard Jewish voices a platform from which to explain that, while the kind of anti-Jewish hatred that led to the obscenity of the Holocaust had to be confronted head on, alleging that criticism of Israel is necessarily antisemitic is counterproductive and open to abuse as a means of preventing discussion of Israel/Palestine.

Uniformed police and security staff performed bag searches on the way into Committee Room 12 and stood ready to intervene if needed. At least one Israeli flag was confiscated and three individuals intercepted attempting to get in using names other than their own.

Sheppard made an opening statement and then handed over to the all–Jewish panel:

Avi Shlaim, Emeritus Fellow of St Antony’s College and Emeritus Professor of International Relations at the University of Oxford, author of many books about the history of Middle Eastern conflict;
actor and writer Norma Cohen, author of fact, fiction and drama about her Russian/Jewish/left-wing/Zionist/Liverpudlian heritage;  and
Neve Gordon, Vsiting Professor at SOAS whose  research focuses on international law, human rights, the ethics of violence, the Israeli-Palestinian conflict and political theory.

The three speakers outlined their different perspectives on a unifying theme – that the fight against the real threat of antisemitism is not served by using allegations of Jew hatred to silence discussion of Israel’s unjust actions against the Palestinian people, and that there is nothing in Jewish tradition and history to support the idea that opposing Zionism is inherently antisemitic.

Norma Cohen said there were many ways of being Jewish and drew attention to the endeavours of courageous Israeli artists, from renowned writers to filmmakers, to question and criticise human rights violations. She said calling out the harsh deprivations resulting from Israel’s occupation of Palestinian land was not antisemitic, on the contrary, “It makes me more of a Jew to speak out.”

Neve Gordon argued that efforts to equate Zionism with Jews is intentionally misleading, since Zionism is also embedded in nationalist and settler colonial ideologies of the 18th, 19th and 20th centuries. He went on to show that Zionism has many friends who are antisemites, who support Israel in resisting the decolonisation process needed to achieve justice for Palestinians as well as peace and security for Israeli Jews.

Some of the habitual disrupters, occupying about a quarter of the seats in the room, occasionally broke out into shouting, holding up signs claiming to represent 99 percent of Jews, thumping the table with their fists and demanding to speak. Four of the ten speakers called by the (Jewish) chair to take part in the discussion were antagonistic to the platform. The presence of Tommy Sheppard inside and of the Parliamentary Sergeant At Arms outside helped keep this in check.

One Jewish woman in the audience testified afterwards on Facebook to how disturbed she felt “in the face of the violent behaviour and obvious scorn shown to us in the room. I really felt their projection onto us as the enemy within. For my part it was shocking to be up close to people from my/our own heritage who hate me/us.” 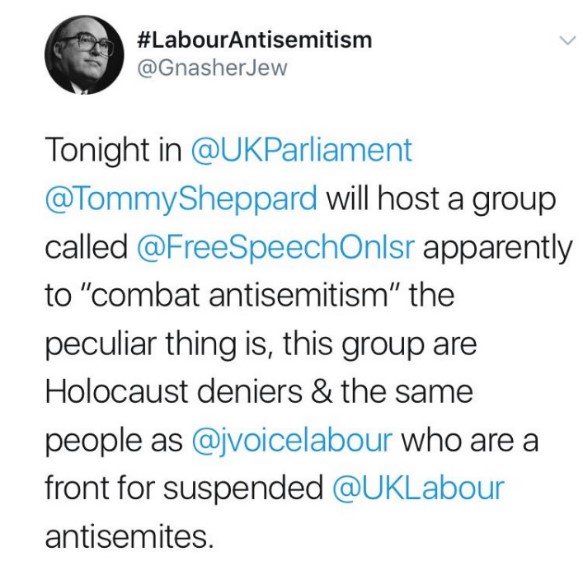 A social media operator who likes to remain anonymous behind the Twitter name @GnasherJew, accused the organisers of being Holocaust deniers and alleged that Jewish Voice for Labour, which has FSOI members among its founders, is a front for antisemites. MPs received emails calling for the meeting to be cancelled.

One of the most vociferous serial disrupters tweeted the following day, “Pleased to report that 25 Zionists gave the AS-A-Jews a good kicking.”

But it has become axiomatic that any discussion sympathetic to Palestinians and critical of Israel, whether organised by Jews or not but especially if held in an academic setting, runs the risk of being targeted with attempts to ban it in advance or to wreck it if it goes ahead.

Since the UK government adopted a new definition of antisemitism which equates hatred of Jews with criticism of Israel and Zionism, there has been much more of this.

Recent examples include censorship of a lecture at Manchester University by Holocaust survivor Marika Sherwood, refusal by two universities to host seminars led by former UN rapporteur on Palestine Richard Falk and the breaking up of a discussion at SOAS after a film show hosted by a university staff member.

The behaviour of the disruptive individuals is clearly intended to prevent others from listening to, expressing or debating legitimate views about Palestine, Israel, Zionism and antisemitism. Academic institutions, commendably, are resistant to the idea of excluding opposing viewpoints even when there is clear evidence of disruptive intent. In many cases the result, unfortunately, is suppression of criticism of Israel, in contravention of the right to freedom of expression that academic bodies have a duty to protect.

The disruptors’ behaviour not only causes alarm and distress to others present. Often the abuse they hurl at speakers and audience members, including people who lost family members during the Holocaust, is grossly offensive and apparently racially motivated, as with the “Kapo” charge at the book launch on November 14.

Such incidents are becoming increasingly common. It seems that these aggressive far right individuals feel empowered by the actions of pro-Israel Jewish leaders making common cause with white supremacist Islamaphobes around the world. The threat of their aggressive behaviour turning to physical violence cannot be ignored.

So how are we to deal with people, claiming to represent Israel-supporting British Jews, who seem determined to shut down discussion of viewpoints with which they disagree, using tactics that would horrify most Jewish people?

Most Jews would have nothing to do with either the methods or the political links of people like Sharon Klaff, one of the hostile crowd at the House of Commons meeting. She and fellow anti-Muslim campaigner Ambrosine Yolanda Shitrit have been spearheading protests against an Islamic cultural centre in Golders Green. Media reports quoted Klaff speaking for Golders Green Together, a group set up to oppose the Hippodrome development. It hosted Gavin Boby, a lawyer nicknamed “Mosque buster,” at a protest meeting where Shitrit also spoke. Their campaign has been rightly condemned by Jewish community leaders.

Both Klaff and Shitrit took part in a rally in London in April 2015 in support of Pegida UK, co-founded by the fascist former leader of the English Defence League, Tommy Robinson.

In July 2017 Shitrit and Klaff picketed the Queen Elizabeth II Conference Centre in Westminster where a major Palestine festival, PalExpo, was taking place. Also present were Jonathan Hoffman, one of the most vociferous and frequent disrupters, another self-proclaimed pro-Israel activist Gemma Sheridan, who helped to break up the antisemitism book launch on November 14, and Paul Besser, former intelligence officer of Britain First.

For the most part, mainstream Jewish organisations are careful to avoid any hint of friendly relations with far right anti-Muslim groups. In July 2017 for example, Marie van der Zyl, vice-president of the Board of Deputies of British Jews, publicly took issue with members of the Jewish community in Prestwich, north Manchester who had reportedly hosted former EDL leader and Pegida UK co-founder, Tommy Robinson, at a secret meeting. Van der Zyl said, “Tommy Robinson’s record of anti-Muslim provocation means that he could never be a partner of a respectable or mainstream Jewish organisation. Our community should not tolerate any form of hatred.”

These are sentiments with which almost every member of the UK Jewish community would concur. Most would surely also agree that pro-Palestinian narratives deserve to be heard and that dissenting Jewish voices must not be suppressed.