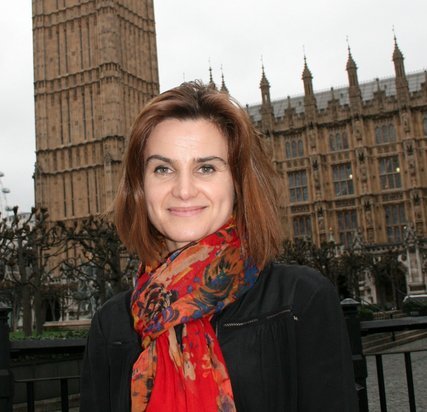 We share the widespread sadness and anger at what appears to be the assassination of Jo Cox MP by a right wing terrorist, and want to express our condolences to her husband Brendan, her children Lejla and Cuillin and her many friends.

Electronic Intifada, CAABU, PSC and MAP have published tributes to Cox who was an outspoken advocate for Syrian and Palestinian human rights. Last year she put down an EDM on Gaza to mark the first anniversary of the 2014 bombing, and she called the Conservative government’s legal threats to curtail the boycott of Israel “a gross attack on democratic freedoms. It is our right to boycott unethical companies.”

My latest letter on #Gaza pic.twitter.com/Ayci3GZPdW

We reprint her brief, but powerful contribution to the parliamentary debate on Child Prisoners and Detainees: Occupied Palestinian Territories. A number of Israel lobbyists were present and defended Israel’s record, including Labour Friends of Israel officer, Louise Ellman. It was in the context of cynical campaigns – such as this – to demonise and blame the victims, that Cox’s compassion always shone through.

Another Joe, Joe Hill proclaimed, ‘Don’t mourn, organise’. We will mourn but we will also organise.

Watch the debate on Child prisoners and detainees in the Occupied Palestinian Territories:

In January this year, Sarah Champion (Rotherham) (Lab) moved that the House consider damning reports into Israel’s system of martial law that is now in its 49th year, including allegations that “alleged ill-treatment of children during arrest, transfer, interrogation and detention have not significantly decreased in 2013 and 2014”. Cox made one of the earliest contributions:

Jo Cox (Batley and Spen) (Lab)
I congratulate my hon. Friend on securing this debate. She will be aware that evidence from Military Court Watch suggests that 65% of children continue to report being arrested at night in what are described as terrifying raids by the military. Will she comment on that worrying fact?

She was preceded by Mrs Louise Ellman (Liverpool, Riverside) (Lab/Co-op) who asked Champion if she accepted that “the context in which these situations occur is an organised campaign conducted by the Palestinian authorities of incitement, to try to provoke young Palestinians to carry out acts of violence towards other civilians, some of which result in death, including the death of young children?”

Cox’s contribution was followed by that of Conservative Friend of Israel Vice-Chairman, Andrew Percy (Brigg and Goole) (Con) who suggested Champion “knows full well that the difficulty of arresting people during the day instead of the night is that it has led to deaths and riots. The authorities are operating in a very difficult context.”

It is worth noting here that Jo Cox was joined in her condemnation of Israel’s actions by Naz Shah MP, who made a memorable and complementary contribution:

Naz Shah (Bradford West) (Lab)
I congratulate my hon. Friend the Member for Rotherham (Sarah Champion) on securing this very important debate, and it is a great honour to serve under your chairmanship, Mr Chope.

I will keep my speech very brief. The hon. Member for Brigg and Goole (Andrew Percy) referred to a doll. I would argue that people do not need dolls to promote hate and violence. What we have before us in Israel and Palestine is children between the ages of nine and 12 experiencing discrimination. I have children of my own who are aged eight and 11, but I cannot begin to imagine the trauma and the stamp on Palestinian children’s brains and hearts of hatred towards the Israeli military as they grow up and face discrimination, as well as the way they are tret in custody. So I would argue that we do not need props.

Only recently, Shin Bet told the Israeli Government that Abbas was not encouraging terror and was actually promoting peace. So, I disagree with my hon. Friends when they say that the Palestinians are promoting this kind of propaganda.

As a former chair of a mental health charity and having my own children, I really struggle to understand why the Israeli Government and the world are silent on dealing with the trauma that these Palestinian children are growing up with. Surely we know that hate breeds hate; laws aside, that is just common sense. There are children who are blindfolded and tortured. We have got evidence before us. How can my hon. Friends ignore that? How can anyone even present a counter-argument to it? We are talking about the basic humanitarian right of children, which we in this House have signed up to, and we must support these children with conviction. There should be no excuse for taking children aged nine away from their homes, detaining them and sending them to prison. That is absolutely unacceptable.

Mrs Ellman
I note my hon. Friend’s comments that a child should not be detained, and I assume that she means in any circumstances. Suppose a child was involved in an act of violence that resulted in the deaths of other human beings. That is what has happened with young Palestinians throwing stones—people have been killed. In those circumstances, surely she thinks that there should be detention.