Yesterday, Young members of the Jewish Labour Movement, posted on the JLM website a letter that – much to their vexation – the Guardian had declined to publish. It isn’t hard to see why: it repeats the mainstream media’s default position that Labour under Corbyn is a ‘haven’ for anti-Semites. JLM’s complaint that they are a ‘group of Jews’ whose views are not being heard is the complete inverse of reality.

The Zionist contention that groups like JLM and JSocs/UJS are the victims not the aggressors is becoming increasingly risible: they have been in the forefront of the smear campaign against the Labour Left; one of their targets, Malia Bouattia, was fortunate enough to have a strong, wide base of support and nerves of steel to withstand their onslaught. The JSoc presidents published TWO – not one – open letters in their attempt to destroy Bouattia’s reputation prior to her election as NUS president, demanding she prove she wasn’t an anti-Semite: an action that was picked up with glee by every media outlet as evidence that all British Jewish Students lived in fear of her racist reign. This intimidation was only a continuation of the harassment she and others experienced as Palestine solidarity activists on campus, leading Bouattia in 2011 to call Birmingham with its large, pro-Israel JSoc ‘something of a Zionist outpost.’

In the preamble to their unpublished Guardian letter, Young JLM members referred contemptuously to a letter signed by 88 British Jews (one of many critical responses to the Chief Rabbi’s article that Zionism=Judaism), by writing,

It appears that some of those signatories only identify as Jews for purposes of taking such contrary positions.

Perhaps in response to protests that it was offensive, demeaning – even racist – to portray non-Zionist Jews as imposters and ‘contrary,’ JLM removed that sentence. Liron Velleman who posted the letter on the JLM website is both Youth and Students Officer at JLM, and incoming UJS Campaigns Officer. Here is a screengrab of the original, and the updated website post below it. As Jews Sans Frontieres has written: ‘I had a feeling they’d excise the offensive suggestion that Jewish critics of Israel aren’t quite the real thing,’ quipping, ‘spot the difference’: 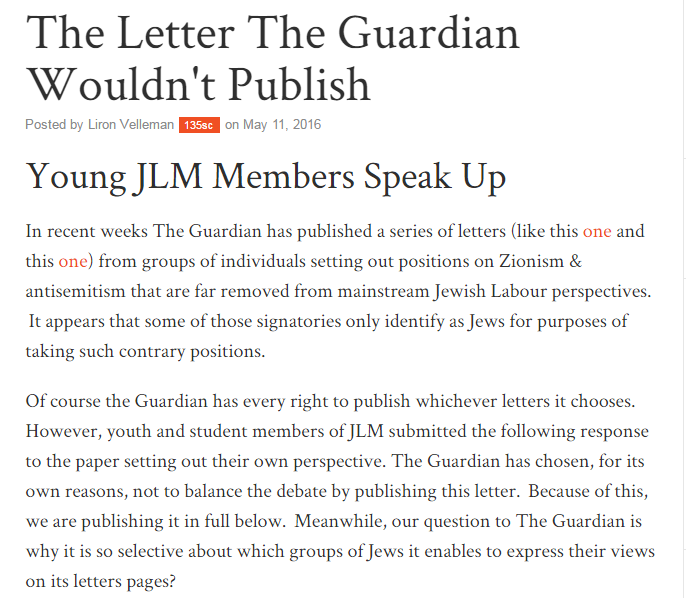 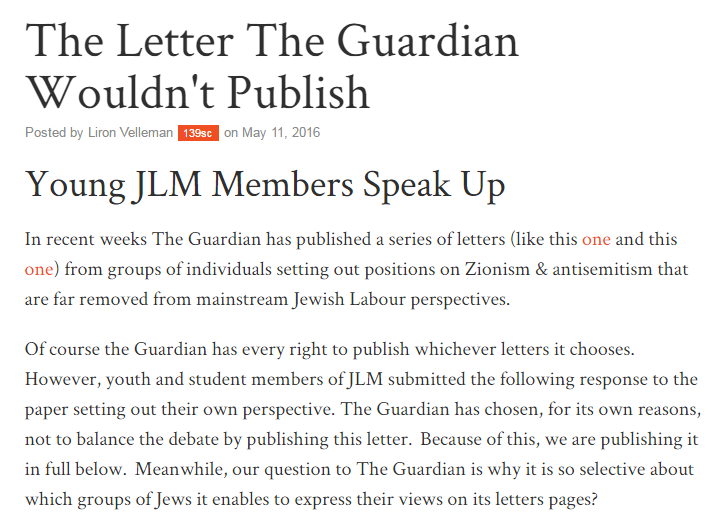