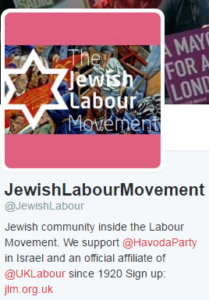 Haaretz’s Ravit Hecht has called on the Israeli Labour Party to ‘Bear Its Shame,’ asking: wouldn’t it be better for them to ‘simply join the Netanyahu government and end their sad pretense of opposition?’ The ’embarrassing attempts to crawl into a unity government’ by the Party leader, Herzog, is reflecting badly on JLM. In Hebrew, the Israeli Labour Party is Mifleget Havoda HaYisrelit. It receives official support from the Jewish Labour Movement (JLM), here in the UK. And Hecht is right: shouldn’t the Party that JLM supports ‘stop deceiving the public,’ both at home and abroad?

What benefits do those who fear the growing racism against Arabs and the violent incitement against leftists receive from an opposition including Labor MK Eitan Cabel, who denounced his party colleague Zouheir Bahloul and rushed to join in the verbal assault on Breaking the Silence following an “investigative report” against it by a right-wing group?

And what has Labor MK Ayelet Nahmias-Verbin done to end the occupation? And how has Labor MK Eitan Broshi, who is hungrily eyeing the Agriculture Ministry or the World Zionist Organization’s Settlement Division, helped resist the onslaught of delegitimization that the government is leading against the left?

apparently includes the Economy Ministry, the Agriculture Ministry and another few unimportant ministries, along with other jobs and the trappings of power, in exchange for cooperating with the most right-wing, unrestrained government we have ever had here, and giving a safety net to someone whom Herzog not so long ago awarded a failing grade for running the country.

[…] At first glance, this move, whose entire purpose is to provide Herzog with a personal lifeline (though it’s not clear where it’s meant to pull him in the future), would indeed crush the political left and leave the opposition in the heads of Yisrael Beiteinu chairman Avigdor Lieberman, a crude nationalist motivated by self-interest, about whose moral make-up the prime minister himself has provided evidence; and Yesh Atid chairman Yair Lapid, who is capable of inciting even against himself if he discovers that it will help him in the polls.

[…] The entry into the government of any of Herzog’s loyalists wouldn’t necessarily be disastrous. Perhaps, as in the case of Ehud Barak – who abandoned the Labor Party when he joined the government in 2011, and subsequently disappeared from the political map along with the other intellectual giants of his Atzmaut party – it would present an opportunity for renewal.

Hecht’s optimism may be unwarranted, but it is revealing; she hopes that the Labour Party will shed its ‘viper’s skin.’

And even if it remained lean and shriveled, perhaps finally an ideological opposition to this government of incitement, occupation and settlements would arise, together with Meretz and, with a little goodwill and creativity on both sides, also with parts of the Joint Arab List.

[…] An opposition that dissolves like a baby tooth in a glass of Coca-Cola when faced with an aggressive government that intimidates everyone except its own loyalists doesn’t deserve to be called an opposition. We should let it return to its natural place – collaborating with the government.