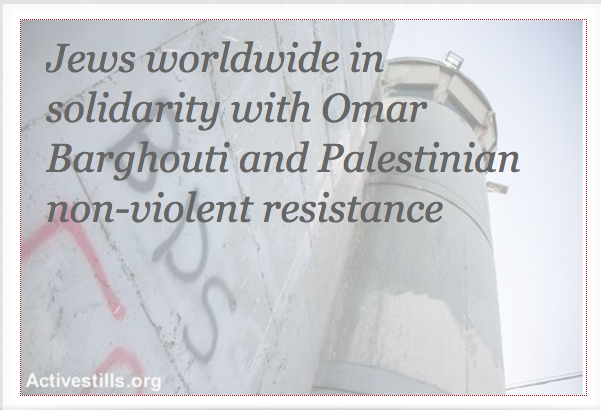 Add your name to the petition, below.

We, the undersigned Jewish organizations and individuals from various countries all over the world, call upon all governments as well as upon international bodies to use all their available means of diplomacy and power to compel the Israeli government to immediately halt its intimidation campaign against Omar Barghouti and the Palestinian-led BDS Movement.

Reasons:
Israel has officially declared its determination to use everything in its power to intimidate and supress the leaders and supporters of the international BDS movement—including the usage of targeted actions by intelligence agencies. Israel’s Minister of Justice Ayelet Shaked instructed the international department of her ministry “to prepare a plan of legal steps” in order to “move from defence to offence” against the BDS movement already a year ago, with the full backing of the Israeli government, to run a massive campaign aimed at criminalizing the internationally-growing BDS movement, and at silencing any protest against the ongoing Israeli occupation.

Meanwhile Aryeh Deri, Israel’s Interior Minister personally took efforts to revoke the permanent residency status of Mr. Omar Barghouti, acting coordinator and spokesman of the BDS movement in Ramallah. He has been barred from leaving the country ever since. His life and well-being have been threatened by Israeli officials repeatedly.

As Jewish organizations and individuals committed to human rights, to democracy and to the rule of law, we speak out against the widespread attacks by the current Israeli government against the BDS movement. Appalled by this state-led bullying against non-violent resistance to the illegal Israeli occupation, we wish to underscore a basic truth which seems to escape the current Israeli administration and its apologists:
International citizens’ boycotts against ongoing abuse of international law are a legally-protected and fundamental civil right. Civil boycotts are a key means of non-violent protest. They cannot, precisely, be interdicted, made illegal or punishable.

In steadfast defence of accepted universal human rights and established standards of international law and decency, we therefore demand:

The end to Mr. Barghouti’s residency restriction and the reinstatement of his right to free movement

The guaranteeing of Mr. Barghouti’s and all other Palestinians’ freedom of movement, of political expression and of assembly

Among the first 100 signatories are: