Accusing the Sun of double standards is more dog bites man than man bites dog. Their double standards are usually deplored by all those not in the pay of, or in thrall to, Rupert Murdoch. This time however they have been given a free pass by IPSO, The Independent (sic) Press Standards Organisation. 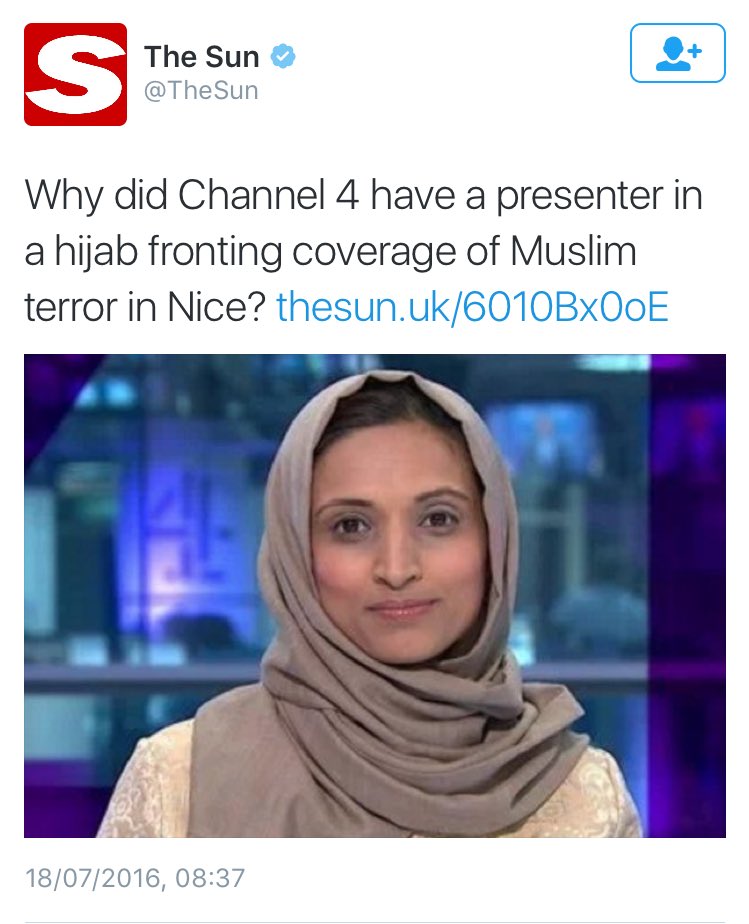 The day after the Nice bombings, The Sun published a Kelvin MacKenzie column attacking Fatima Manji for presenting on the Channel 4 News while wearing a hijab. MacKenzie effectively accused Manji of being a terrorist supporter for wearing her hijab; and, even if not a terrorist supporter, causing distress to faint-hearted viewers by her choice of headgear. MacKenzie, naturally, overlooks the large number of Muslims who were killed in the outrage and the comfort that Muslim viewers might have gained from seeing a presenter they could identify with when their co-religionists had been killed and their deaths overlooked. For MacKenzie and his ilk only the deaths of ‘real’ French people is to be mourned.

Imagine the reaction if anyone had accused a Jewish reporter of supporting any of the terror activities of the Israeli government simply on account of the wearing of a Yamulke. The imputation of political belief from religious identity is a mark of antisemitism; it is equally a mark of Islamophobia. Pointing to someone as being sympathetic to terrorism without clear evidence is, or should be, well beyond even the generous boundaries accorded to newspaper columnists in Britain; but not in IPSO’s book.

We must judge journalists on what they say and write not on their religious or ethnic identity.  On this metric it is Manji who comes out far ahead of MacKenzie.

Many had doubts when the newspaper industry set up IPSO after the Leveson inquiry and that it would be another in the long succession of industry toothless watchdogs. These doubts have been confirmed by this latest example of failure to distinguish free speech from abuse.

FSOI has long been concerned that the manufacture of concern about a relatively low level, although still deplorable, antisemitic comment has occluded a far greater level of Islamophobic abuse. Abuse not just on Twitter and on the streets but tolerated and enacted at the highest levels of British society. IPSO’s failure to recognise such unambiguous Islamophobic abuse sits alongside their toleration of the excoriation by much of the press of marginal, or even fantasised, antisemitic speech . An unbalanced view of the world also apparent in the reception of the Chakrabarti report and more recently in the Home Affairs Select Committee report.

2 thoughts on “Double standards at the Sun”