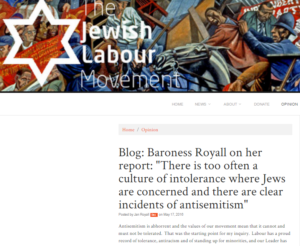 Baroness Royall, who this week joined the Chakrabarti Inquiry as co-vice chair with Professor Feldman, and today released an executive summary and recommendations of her report into antisemitism at OULC, has taken the extraordinary step of writing a lengthy and exclusive post on the Jewish Labour Movement’s website. JLM is affiliated to the World Zionist Organization, and has proposed a rule change to the Labour Party Membership rules that could see anti-Zionists suspended for using ‘Zionist’ as a pejorative.

Chair of Jewish Labour Movement, Jeremy Newmark – whose evidence of ‘institutional antisemitism’ at UCU was found in 2013 by an employment tribunal judge to be “false, preposterous, disturbing and arrogant” – has proudly announced on Twitter this potentially partisan move on behalf of Royall.

2 thoughts on “Why is vice-chair of Chakrabarti inquiry blogging on pro-Israel JLM’s website?”