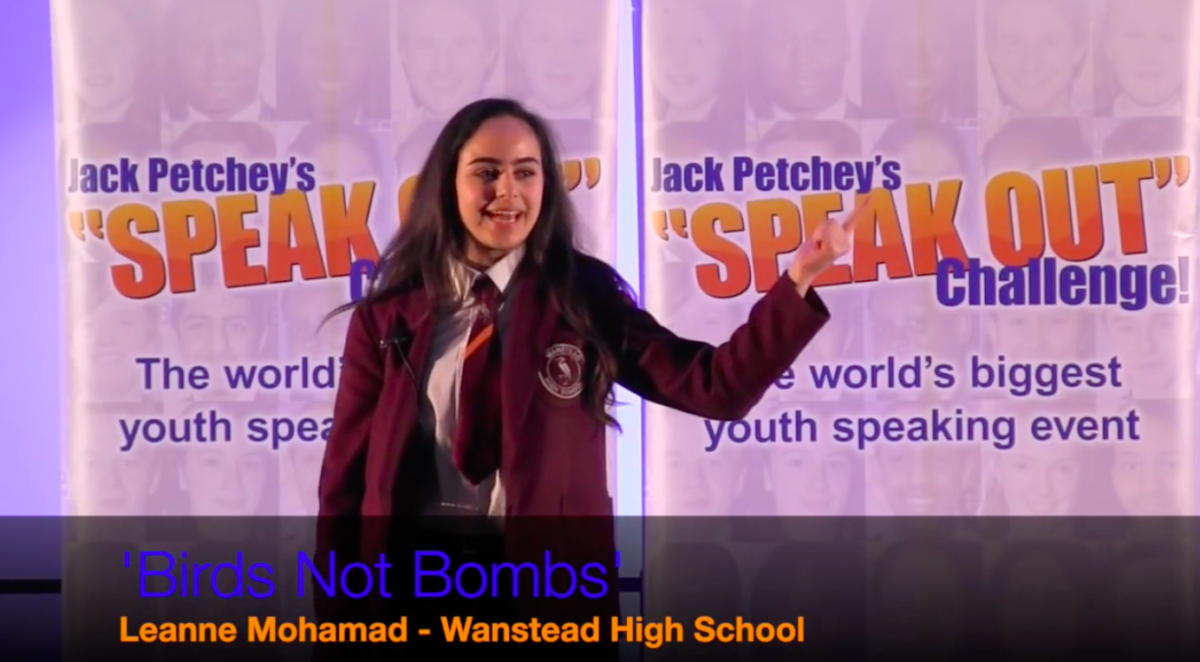 Further update, 1  June: Speakers Trust have now restored the video to their website.

In an interview with Middle East Eye, Speakers Trust CEO Julie Holness has denied that Jack Petchey Speak Out Challenge regional finalist Leanne Mohamad was disqualified, and said her earlier comments on the controversy had been “misconstrued”. She explained that the teenager was one of 22 regional winners whom judges decided did not merit a place in the next round of the competition. She also reiterated the Trust’s defence that the decision to ‘temporarily’ take down the video of Leanne’s speech – and delete all reference to her win on the website – was to protect the 15 year old from abuse.

Holness’s letter to anti-Palestinian blogger Edgar Davidson (pasted below) and the Trust’s panicked actions betray an ignorance of the Palestinian experience of dispossession and censorship through Israel’s attempts to erase and deny the history of Palestinians in their homeland. It is this experience that informed Leanne’s impassioned speech as well as her subsequent distress at the disappearance of her award-winning speech:

Why is it called a “Speak Out Challenge” when I am then silenced?

Leaving aside the fact that it is just as easy to disable comments as it is to remove a YouTube video, let’s revisit Holness’s exchange with bigot and Nakba-denier, Davidson. I have repeatedly asked the Trust by email to explain this exchange: their responses do not address the content of their CEO’s letter, however. Nor do they in their latest statement.

Holness’s “misconstrued” comments consisted of her stating that the judging panel had shared his “concerns” that Leanne’s speech was inflammatory propaganda. The tone of her letter is respectful and apologetic. Davidson understandably took it as proof that Speakers Trust shared his view of the Palestinian narrative, and duly published her letter online. The story was then picked up by the pro-Israel Jewish Chronicle that erroneously reported Davidson had influenced the judging panel. In his letter to Speakers Trust, Davidson threatened to report the charity for supporting “vicious blood libels against Israel,” and denied all instances of Israeli violence towards Palestinians:

For the record there are no verified instances of Palestinian children being ‘murdered’ by Israel, although many dozens have died as a result of Hamas and other Palestinian terrorist groups launching unprovoked rocket attacks against Israeli civilians (often from schools and hospitals) and then using their own children as human shields when Israel has responded. In fact, Amnesty International (an organisation that has traditionally been hostile to Israel) reported just this week that most of the child casualties of the 2014 conflict (that was started by Hamas) were actually killed by Hamas rockets falling short of their ‘target’. [*See note below]

In response to these victim-blaming claims that amount to a denial of ethnic cleansing and serial atrocities, Holness clearly expressed agreement and regret, and suggested Leanne had not been chosen because of similar “concerns”, thus appeasing her chief abuser:

Thank you very much for your email, which my colleague Rebecca Griffiths has this morning forwarded to me. We take your concerns very seriously.

Every year thousands of young people are trained in the art of public speaking. They are encouraged to speak out on something they feel passionately about and of course they bring with them their history and culture and beliefs.

There are, however, two fundamental rules that are made explicit during the training:
– the speech must have a positive and uplifting message – in fact this is one of the core terms of the agreement with the Jack Petchey Foundation.
– a speaker should never inflame or offend the audience or insult others and this, by definition, means that propaganda is ruled out absolutely from the outset.

It is, however, the school that votes through its most talented speaker in an Assembly final and an independent panel of judges from the local community who select their regional winner. Speeches at this level will have been further developed and even rewritten, with the training guidelines but without our input on content. Judges do not mark a speaker down because they disagree with a point of view but they are clearly briefed on the those guidelines. Unfortunately, with over 18,000 young people trained annually, a speech that does not observe these ground rules may very rarely get through on passion and delivery.

Last Saturday a Speakers Trust and Jack Petchey Foundation judging panel decided unanimously against sending Leanne Mohamad through to the next stage and she will not be speaking at the Grand Final. These were precisely our concerns.

As a Speakers Trust trainer I was responsible for managing the schools in Redbridge and I have a close affinity with the region. Please let me know if you would like me to forward your email to Wanstead High School so that your comments and reservations may be heard.

If you wish to discuss this further you have my home office number below, which you are welcome to use at any time.

Holness is not alone in giving credence to the Zionist narrative, but there is no excuse for her ignorance in 2016. It is inconceivable that a similarly toned letter denying the Holocaust would have received such a grovelling response.

The Speakers Trust website currently carries an interview with one of their trainers, Phil Heath:

Who is your favourite public speaker from the past or present?
I admired Hitler as a speaker (not his principles of course!) He was passionate about his cause and could rally people to follow him. He was a brilliant orator with fantastic body language and passion.

This opinion held by an adult is arguably more inflammatory and insulting than a speech by a 15 year old schoolgirl. [Heath’s quote has since been removed, see screenshot below.] 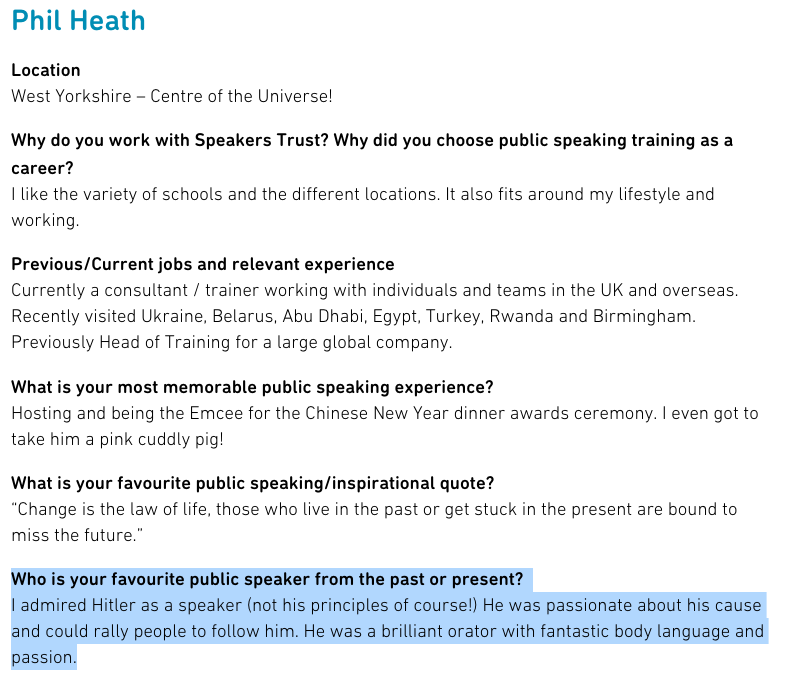 Israel killed at least 2,000 Palestinian civilians, including more than 500 children in Gaza in summer 2014. Amnesty’s evidence showed that in one incident believed to have been caused by a Palestinian attack, 11 children were among 13 Palestinian civilians killed when a projectile fired from within the Gaza Strip landed in the al-Shati refugee camp.