Robert Cohen praises the moral vision that led the Quakers to boycott companies profiting from the Occupation and decries the tunnel vision of the Board of Deputies in denouncing it.

The Board’s statement is worth examining in detail since it reveals so much about the Jewish establishment’s mission to set the parameters of acceptable debate on Israel to the detriment of interfaith relations.

Paul Parker, recording clerk for Quakers in Britain, explained why the Quakers had taken the decision:

“Our long history of working for a just peace in Palestine and Israel has opened our eyes to the many injustices and violations of international law arising from the military occupation of Palestine by the Israeli government.

“With the occupation now in its 51st year, and with no end in near sight, we believe we have a moral duty to state publicly that we will not invest in any company profiting from the occupation.”

The Quakers also reaffirmed a 2011 decision to boycott goods produced in Israeli settlements. 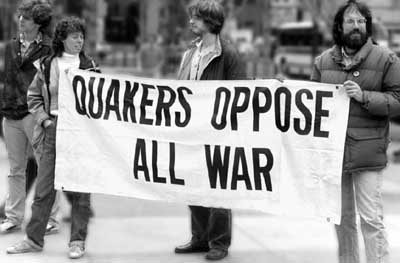 nt van de Zyl’s response was a verbal assault which showed no respect for the Quakers nearly 400 years of commitment to peace and justice in Britain nor the practical experience it has in bringing reconciliation to some of the world’s most troubled places. Instead, Marie van de Zyl was an inch away from accusing the Quakers of antisemitism.

“The appalling decision of the Friends House hierarchy to divest from just one country in the world – the only Jewish state – despite everything else going on around the globe, shows the dangers of the obsessive and tunnel-visioned approach that a narrow clique of church officials have taken in recent years.”

There’s a lot going on in that opening salvo but all of it is devoid of historical or political context.

What exactly is so “appalling” about a Christian denomination with a natural concern for what takes place in the Holy Land, choosing to demonstrate its historic commitment to non-violence by implementing a policy of divestment from companies which profit from the occupation of Palestinian land?

Quakers have used boycotts as a tactic many times over the centuries. In the 19th century they boycotted produce produced by slave labour, even refusing to put sugar in their tea. In the mid 20th century American Quakers supported boycotts in support of Black Civil Rights. In the 1980s Quakers backed anti-apartheid boycotts. Today, Quakers in Britain refuse to invest in fossil fuels.

The Board ignores this ethical tradition, preferring to distort the Quakers’ motivations by accusing its leadership of being solely concerned with “one country”, “the only Jewish State” and thereby planting the idea that there must be something antisemitic in all of this.

The Board knows full-well that no country or group has ever applied boycotts consistently, and that includes Jews and the State of Israel.

In the 1970s Jewish activists boycotted Soviet Union sponsored culture events in the U.K. Should they have also boycotted Idi Amin’s Uganda before they had the right to campaign for Soviet Jewish rights? Must Israel today call for trade sanctions against every distasteful regime around the world before it can talk about Iran? The British Quakers are naturally focused on a part of the world where they have obvious interest and decades of experience. What on earth makes it antisemitic?

But the Board ignores another critical consideration in the Quakers’ decision that goes a long way in explaining why its divestment tactic is being applied to Israel. The Palestinian people, including a comprehensive coalition of Christian organisations, have themselves called for this form of global support.

The Board condemns the Quakers for ignoring “everything else going on around the globe” but a quick look at the Quakers’ website shows how ignorant this accusation is.

The Quakers International Work page shows its commitment to challenging corruption and abuses of power in Kenya, Rwanda and Burundi and its conciliation work in South Asia. This is alongside its longstanding work in co-ordinating the Ecumenical Accompaniment Programme in Palestine and Israel (EAPPI). In recent decades the Quakers have also been actively involved in conciliation work in Northern Ireland and Sri Lanka.

In contrast, if you look at the Board of Deputies’ website you’ll find nothing about concern for the rest of the world apart from Israel and the Middle East.

As for the “narrow clique of church officials” the Board’s President really ought to visit some Quaker Meetings around the country if she thinks this decision will not have considerable support from Friends at the grassroots.

I’ve spoken about my Jewish solidarity for the Palestinian people all over the country and, invariably, I find myself speaking in Quaker Meeting Houses. That’s because Quakers are willing to allow their buildings to be safe spaces for free speech in the name of peace and justice.

I’m yet to find a synagogue offering me the same hospitality. In fact, Board of Deputies officials are in the habit of trying to stop me speaking. So where in reality is the “narrow clique” controlling the debate? Friends House or Torriano Mews?

The statement from Marie van de Zyl notes that there was:

“no particular trigger incident for this decision, just the ongoing insistence of certain Quaker bureaucrats of feeding a diet of one-sided propaganda to those unfortunate enough to rely on them for information.”

The reason there was no “trigger incident” is precisely because Quakers in Britain has taken its time in reaching this decision. It’s not a knee-jerk reaction to anything. It’s recognition that 25 years of ‘peace process’ has made the situation worse with the prospect of justice and peace further away than ever. A different approach is needed to shift the dial.

As for “one sided propaganda”, I haven’t noticed the Board of Deputies ever offering a broad spectrum of views on Israel.

What’s interesting to observe about the Board’s attitude is the presumption that it has the right to dictate to other faith communities what their policy on Israel should be. Marie van de Zyl contrasts the Quakers’ independent thinking with how she prefers Church denominations to behave:

“While other churches have reached out to the Jewish community at this time of rising antisemitism and polarisation to work together to tackle prejudice and promote peace in the region, the Quaker leadership has chosen to import a divisive conflict into our country, rather than export the peace that we all want to see.”

In other words, let us tell you what to think and what to do when it comes to Israel.

And note how criticism of Israel is placed firmly within the context of “rising antisemitism”. Only the Board, it appears, understands how to “tackle prejudice” and “promote peace”. Anyone that considers an alternative course of action is just “importing a divisive conflict”.

Van de Zyl concludes her diatribe by calling on Quakers in Britain to reverse its decision and “join those of us looking to build bridges instead.”

But what is the Board’s idea of bridge building? What kind of Church behaviour on Israel is considered acceptable to Marie van de Zyl?

We’ve seen the answer this month with a series of events around the U.K. organised by the Board of Deputies and Churches Together in Britain and Ireland with the title ‘Investing in Peace’.

The Board brought together Jewish Israeli and Palestinian peace activists with a message not to “take sides” but to “build bridges” through grassroots relationships.

I’ve got nothing against any of this in principle. It’s good as far as it goes. But it’s designed not to go too far. I can tell this from van de Zyl’s quote in the accompanying press release:

“At a time when tensions and emotions are understandably running high, it is so refreshing to have balanced, nuanced dialogue on this topic.”

So, Investing in Peace sets up the discussion within a paradigm of “balance” and “nuance” as if the lack of such things has been the stumbling bloc to peace over all these years. It’s a narrative which ignores the power dynamics on the ground. The dynamic of oppressed and oppressor in Israel/Palestine. But if that true relationship is not acknowledged and confronted, neither justice nor peace are likely to emerge.

The Board of Deputies has shown itself incapable of understand why Quakers in Britain could be justified in adopting a divestment policy. That’s because the Board of Deputies is acting not as a Jewish community body in the U.K. but as a plank of the pro-Israel lobby. In that role it’s determined to maintain the illusion that Israel/Palestine is a “conflict” requiring “balanced” debate and a heavily managed interfaith conversation.

The Quakers, on the other hand, have grasped the reality and seen through this distortion. I hope others will follow them.

One thought on “As British Quakers divest, Jewish leaders seek to smear them”