A recent article by Phan Nguyen in Mondoweiss ‘The Forward’ fails to find source of anti-semitism hoax that its reporter concocted details how a false antisemitism allegation is expanded and circulated so it becomes accepted as a fact. The necessary components are malicious intent, shoddy journalism and political opportunism.

While the distortion was widely recognised and covered in a number of media, habaraists continued to circulate the lie.

This year following a repetition and expansion of the original fabrication in Israel Hayom, Sheldon Adelson’s right wing and widely read freesheet, the story was picked up by MK Anat Berko who claimed that Students for Justice in Palestine (SJP)  is “collecting information on where Jews live at New York University among others.” This was then relayed back to New York via an article in the ‘liberal Zionist’ newspaper, Forward.

The story has come full circle; the Forward article was written by Laura Adkins who circulated the original false account of the eviction notices. 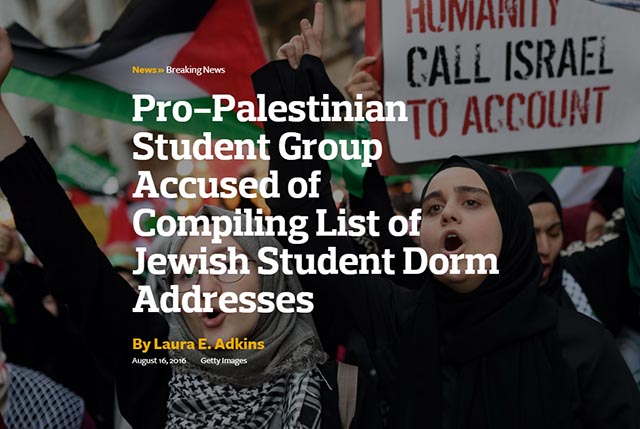 Adkins was widely criticised on Twitter and responded aggressively by her critics of ‘proudly dehmanizing Jews’ or suggesting they were alleging a ‘jewish conspiracy’.

Once their poor journalism had been exposed the Forward first amended and then, following the first version of the Mondoweiss article, deleted the story.

Read the Mondoweiss article in full

One thought on “How a lie becomes a ‘fact’”