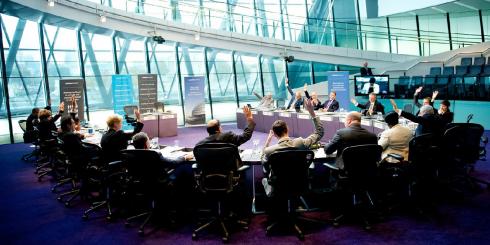 Free Speech on Israel, a Jewish-led organisation, condemns the decision of the London Assembly on Feb 8 to adopt a position on antisemitism that is a charter for censors. It threatens to make effective campaigning for justice for Palestinians impossible.

Antisemitism is an age-old visceral hatred of Jews simply because they are Jews. It must be vigorously fought against, along with all forms of bigotry. To confuse it with opposition to a state which calls itself Jewish, or to the founding ideology of that state, Zionism, is to obscure the real meaning of the term antisemitism and make combatting it more difficult. This is exactly what the motion passed by the Assembly does.

Setting the limits of debate about “the Jewish state” is a key goal of pro-Israel lobbyists only recently unmasked as working hand in glove with the Israeli Embassy to brand any criticism as antisemitic. Labour Friends of Israel, to which the motion’s proposer Andrew Dismore belongs, were shown to be key players in this witch hunt, which has resulted in a wave of suspensions and interrogations of pro-Palestinian Labour Party members. The victims include Jews who, contrary to the claims of the pro-Israel lobby, do not have Zionism woven into their DNA. Jewish organisations have been among those calling for a full inquiry into the extent of Israeli interference in UK politics.

We defer to Avi Shlaim, professor emeritus of history at Oxford and an Israeli Jew, who writes: “Israeli propagandists deliberately, yes deliberately, conflate anti-Zionism with anti-Semitism in order to discredit, bully, and muzzle critics of Israel.”

It is not necessary to agree with Palestinians and their supporters when they question the founding principles of the State of Israel, compare it to Apartheid South Africa or call it to account for its well-documented racism, in order to recognise their right to say such things. The London Assembly has taken a position which endangers that right.

At a time when minority ethnic communities, particularly Muslims, are under constant attack in our society, the London Assembly, on the pretext of defending Jews against racism, has placed itself in the invidious position of defending Israeli propagandists against Palestinians and their supporters. This can only have the unintended consequence of stoking new hostility to Jews who will be seen as attempting to determine what non-Jews may or may not say about a foreign state.

We urge members of the Assembly to reconsider this politically ill-advised move.