Last year, former National Union of Students President, Megan Dunn, launched an independent review into whether the NUS is institutionally racist. The audit was ordered in response to claims that were made at a meeting of the national executive committee by Malia Bouattia, then NUS Black Students’ Officer. Times Higher Education reported on 5 October that Bouattia was not the only member of the union’s top team to make allegations of institutional racism:

Shelly Asquith, the vice-president (welfare), tweeted that the “student movement [and] its institutions are institutionally racist”. “People need to properly accept that before we can begin to overcome it,” she said. […] Earlier this summer, Sorana Vieru, the vice-president (higher education), criticised universities’ “white, male and stale” environment, and the fact that they employ so few black female professors, in an interview with Times Higher Education.

At the time, the organisation’s chief executive, Simon Blake expected the review to be completed by January. In a letter to NUS staff he said the appointees,

will be asked to explore and understand whether there is evidence of direct or indirect racism within [the] NUS’s culture, systems, policies, processes and structures and make recommendations about any changes we can make to ensure we fulfil our commitment to being an organisation that is truly fair, open, accessible and representative of all.

Six months later, Malia Bouattia was elected as NUS President, in spite of a vicious campaign led by JSocs to paint her as an anti-Semite and ISIS sympathiser. Aliya Yule described the reaction:

her election has sparked an array of attacks against her in the media based on racist lies. […] Calls to disaffiliate from NUS have largely been mobilised on the back of these attacks, alongside attempts to belittle and deride the work that NUS does.[…] Some students have argued that we should disaffiliate from NUS because of accusations of anti-Semitism levelled at Malia, many of which were derived from comments taken out of context. Articles reporting these accusations have taken recourse to Islamophobic stereotypes, suggesting they go hand in hand with her being Muslim.

Student campaigns to disaffiliate with NUS have been launched at several universities, including Oxford and Cambridge. JC reports that JSocs at both universities are officially supporting disaffiliation. 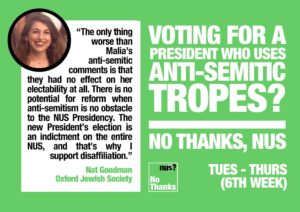 Lincoln and Newcastle have already disaffiliated. It has become a battleground between those who feel they should stay in order to force through change (see poster above), and those who seek to paint NUS as unreformable, or in the words of pro-Israel MP and former NUS president, Wes Streeting, “NUS is lost I’m afraid. It’s had good leadership from Megan Dunn, but it no longer represents students well.”

It is in this febrile atmosphere, that the internal review into institutional racism is being invoked by those in the ‘Yes to NUS’ campaign to win over Zionists.

In Cherwell yesterday, Rivka Micklethwaite made a heartfelt plea: expressing her strong support for Bouattia, she writes that “as a Jewish student at Oxford,” she believed leaving would be “damaging to the fight against anti-Semitism”:

[…] Despite this, Bouattia has been labelled an anti-Semite on the basis of her political opposition to Zionism and two decontextualised comments. Context is important. She described Birmingham University as a ‘Zionist outpost’ because of the vehement opposition to the establishment of a student Palestine Society there. Appallingly, students had to battle for six months against anti-Palestinian campaigners just to win their right to set up the Society.

When she said some of the media was ‘Zionist-led’, Bouattia was explicitly referring to the uncritical support for Israel shown by some sections of the British press; she wasn’t expressing support for shady conspiracy theories about Jewish cabals. It is dangerous and stifling to conflate political opposition to Israel with anti-Semitism. In response to concerns raised by Jewish societies, Bouattia immediately emphasised that her opposition to Zionist politics – an ideology ‘held by people from a variety of different backgrounds and faiths’ – goes hand in hand with her absolute opposition to anti-Semitism.

The most high-profile incidents of alleged anti-Semitism on campuses have been protests against the Israeli occupation and apartheid, and a largely pro-Israel press. It’s also of concern that NUS conference delegates passed a motion in favour of a definition of antisemitism much cited by Zionists, that the European Union Agency for Fundamental Rights explicitly denied having ever adopted. On the face of it, including antisemitism in the internal review seems reasonable: all forms of racism exist in British society and are equally deplorable, but it accepts the premise that antisemitism is not only rife in British universities, but present in “NUS’s culture, systems, policies, processes and structures,” in a way that anti-black racism demonstrably is. It also risks detracting from the original focus of the review.

Just last week, Baroness Royall found no evidence of institutional antisemitism at the Oxford University Labour Club. And as Micklethwaite eloquently argued, the allegations of antisemitism against Bouattia were based on the false conflation of anti-Zionism with anti-Semitism.

Other “Yes to NUS” students’ campaigns are wholly negative, even aggressive.

Oxford University Student Union Rep, Lily Aaronovitch has presented it as a ‘battle,’ (see poster above) referring to anti-Semitic ‘bigots’ in the context of the institutional racism review, and claiming staying in ‘sends a message to anti-Semites.’ And last month Hannah Brady, president of the Union of Jewish Students, urged members to resist calls to cut ties with the National Union of Students. In an email seen by the Jewish Chronicle, headed “When times get tough, we dig our heels in deeper”, Brady said the 2016 NUS conference had been a “trialling and disappointing” experience, adding that “Of course, it is understandable that some have called upon Jewish students and UJS to turn our back on NUS:”

If there’s anything that Jewish student leaders are teaching us now, it’s that when times get tough, we dig our heels in deeper. We learn from the example of our forefathers, and we fight for a better future in which antisemitism does not exist for the next generation.

The distinction between institutional racism, and what Baroness Royall has mystifyingly referred to as “a cultural problem which means that Jewish students do not always feel welcome,” giving as the sole example:

Many students reported that should a Jewish student preface a remark “as a Jew …” they are likely to face ridicule and behaviour that would not be acceptable for someone saying “as a woman …” or “as an Afro-Caribbean”.  This should not be tolerated.

In the absence of the full report, and given the Royall inquiry was a response to a false allegation of anti-Semitism by a former Israel lobbyist, Alex Chalmers who objected to Israeli Apartheid week, one can only infer from Royall’s example that some Labour students who invoke their Jewishness to strengthen a political point, do so in an attempt to defend Israel from criticism. In which case is it any wonder they are challenged, and greeted with exasperation and even derision by human rights defenders, including other Jewish students?

It is more than a little ironic that Lily Aaronovitch’s father, David Aaronovitch (himself NUS President, 1980-82) has labelled Jews that write letters condemning Israel as “AsaJews:”

“these people” were the Asajews. I heard quite a few of them on Any Answers last week. “As a Jew myself, I want to tell you that…” And there followed something that would say that the contributor believed that Labour had no antisemitism problem and that the real problem was those who kept on going on about antisemitism when what they were truly objecting to was any criticism of the state of Israel.

My point in this column is not the Asajews themselves, many doubtless noble and some of whom wear their Jewishness very lightly considering how often they bring it out for rhetorical use.

The Student Union, for which Lily is a Rep, published one of the more poisonous attacks on Bouattia in the run up to the election, although she was not one of the signatories:

We have sent our NUS delegates an email directing them to: the open letter sent by Jewish Society Presidents to Malia; the response from Malia; the counter-response from Jewish Society Presidents to Malia; and our earlier statement on this.We have also reminded delegates that they are accountable to OUSU Council, and should make a decision they are willing to defend: at the end of Conference, the President of OUSU must produce a report for OUSU Council detailing how delegates voted.

Finally, as a sabbatical team we have decided that Becky Howe (as OUSU President, the leader of our delegation to NUS National Conference) will not vote for Malia Bouattia.

It’s not yet clear how Zionists will respond to the “Yes to NUS” campaign to persuade students to vote against disaffiliation. Either way it appears that the NUS review into institutional racism has been distorted – even hijacked – for the benefit of those pursuing a narrow political agenda. This is happening at the expense of equality and justice for Palestinians. Since some of those involved in the current process ran a racist smear campaign against Malia Bouattia, supporters of free speech on Israel should remain vigilant.