UPDATE, 28 May: Walker’s suspension has been lifted

This is the motion passed last night:

Jackie Walker is a long-standing member of the Labour Party, and was vice-chair of Thanet South Labour Party until her suspension. She played a key role in helping to organise the defeat of Nigel Farage when he contested Thanet South in the general election of 2015. She is an active anti-racism campaigner and a founding member of the Kent Anti-Racism Network. KARN has been organising for refugees stuck in the camps of Calais and mobilising opposition to openly fascist groups seeking to stoke anti-migrant sentiment and community divisions on Dover.

We welcome Jeremy Corbyn’s initiative to hold a full inquiry into anti-semitism in the Labour Party. Any member who has made obviously anti-semitic comments should face immediate suspension pending an investigation. But care must be taken not to suspend members on a spurious basis, and that is what Jackie Walker’s suspension clearly is.

Such suspensions are also a clear invitation to the party’s enemies to use our procedures to damage our party and its effective operation.

We call upon the National Executive Committee to lift the suspension immediately, to reinstate Jackie Walker and to apologise to her.

We resolve to send this motion to the National Executive Committee.”

It was carried by an overwhelming vote

In an exceptionally impassioned, moving piece, editor of Labour Briefing, Graham Bash describes what led to the suspension of Jackie Walker, of mixed heritage (Afro- Caribbean and Jewish), from the Labour Party. It was,

simply for telling the truth that her Jewish ancestors were involved in financing the Slave Trade, that the African holocaust was even worse than the Jewish holocaust, and that anti-Semitism is not a major problem in Corbyn’s Labour Party.

As a Jew and Labour Party member (48 years), he writes that he is ‘outraged at the way allegations of anti-Semitism have been used to silence legitimate criticism of Israel and undermine Jeremy Corbyn as my party’s leader.’

I know what anti-Semitism is. I was brought up to learn how the Jewish East End fought with the dockers against Mosley’s fascists at Cable Street. I was told at school how it was a pity that Hitler didn’t finish off the job of murdering all Jews. And very quickly I learned what it was like to be made to feel an outsider. It was hardly surprising that I started going on anti-fascist demos in my late teens and very soon afterwards joined the Labour Party, which I remain a member of to this day.

END_OF_DOCUMENT_TOKEN_TO_BE_REPLACED

The Party suspended Ms Walker after the Jewish Chronicle brought to the attention of Party officials comments made by her in Facebook posts earlier this year.

In her comments, Ms Walker, a black activist of Jewish heritage, said that ‘millions more Africans were killed in the African holocaust and their oppression continues today on a global scale in a way it doesn’t for Jews.’

‘Many Jews (my ancestors too) were the chief financiers of the sugar and slave trade which is of course why there were so many early synagogues in the Caribbean. So who are victims and what does it mean? We are victims and perpetrators to some extent through choice,’ she said. 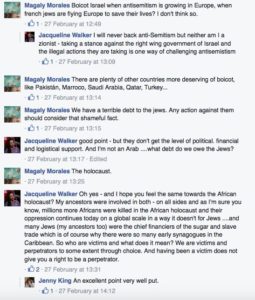 The Jewish Chronicle itself revealed that ‘her comments were uncovered by the Israel Advocacy Movement, which works to counter hostility to Israel in Britain.’

A picture emerges of a leading pro-Israeli government organization trawling through the social media posts of Labour Party activists to brand ideas anti-Semitic when they are clearly not. The targeting of Ms Walker for remarks that have no connection to anti-Semitism suggests that senior labour movement figures, such as Unite General Secretary Len McCluskey, were right when they argued that largely baseless allegations of anti-Semitism are being used by opponents to undermine and destabilize Jeremy Corbyn’s leadership.

The LRC welcomes Jeremy Corbyn’s initiative to hold a full enquiry into anti-Semitism in the Party. Any member who actually has made anti-Semitic comments must face immediate suspension pending an investigation. But there must be an immediate end to the suspension of members on a spurious basis, into which category Jackie Walker’s suspension clearly falls.

Jackie Walker is a long-standing anti-racism campaigner who helped organize the defeat of UKIP leader Nigel Farage in Thanet at the 2015 election. Her suspension must be lifted immediately. We call on all labour movement activists to contact Labour Party Head Office to demand this.

‘I am writing to you in protest against the outrageous suspension of Jackie Walker from the Labour Party on spurious grounds of anti-Semitism. I call on you to reconsider this action and lift the suspension immediately’.